In this tutorial, we shall take a look at how one can make use of React, which a popular JavaScript framework, to create useful web-based applications. We shall learn a few things about React at first, and then learn to build a small application

React just happens to another very popular framework that has been added to the list of several other existing JavaScript frameworks. Considering its large popularity quotient, it has also gained on a large and active community of developers. These developers are dedicated and provide others with a vast array of components that are reusable and thus, save time of other coders. As such, the library does urge people to write loosely coupled code, which is both modular and composable.

What you should know about React?

What shall we build?

We shall lay emphasis on building an application that is composed of several discrete components which work by reacting with one another. What we will do is create a web-based application that allows people to search for locations and then store them in the browser’s local storage.

We shall present the locations on a Google Map that takes the help of GMaps plugin. We shall also make use of Bootstrap with Flatly theme for work on the interface.

How to run the application?

To run the application that we shall be building, you will need to npm and Node.js installed in your system. Here’s what is required of you to do.

Coming to the coding part of the tutorial, let us first take a look into components that we shall be using in the application that we are building.

The first component that we shall code is the App. Besides the lifecycle methods that React requires, there are also a few more that offer main actions that can be performed by the user, such as searching, adding and removing addresses from the favorites and more. You might also want to take note of the fact that we are using shorter ES6 syntax for the definition of methods in objects.

In the render method, what we basically do is initialize other components. Each of these components gets only that data which is needed for getting the job done. At certain places, we also pass functions that child components are likely to call. This is a good way to have components communicate each other, but at the same time also helps in keeping them isolated from one another.

The CurrentLocation component is meant for showing the address of the presently displayed location. It does so in a H4 tag, along with a clickable star icon. When this icon happen to be clicked, the toggleFavorite method from the App is called.

This component takes the array of favorite locations passed to it. Further, it creates a LocationItem object for each one of them and then puts it in a Bootstrap list.

This is basically a single favorite location. It makes use of the momnt library, in order to calculate the relative time from when the particular location was added as a favorite.

This happens to be a special component that we use to wrap the GMaps plugin, which isn’t basically a React component. By connecting to the Map’s method componentUpdate, it is possible to initialize the real map inside the #maps div on the change of the display location.

This component comprises of a Bootstrap form with input group. On submission of the form, the method searchFoAddress from the App is called.

Here we just add the App component to the page. We have added it to a container div, whose id is #main.

Following is the output of the application. If you put some other location, that will be also shown in the map below. 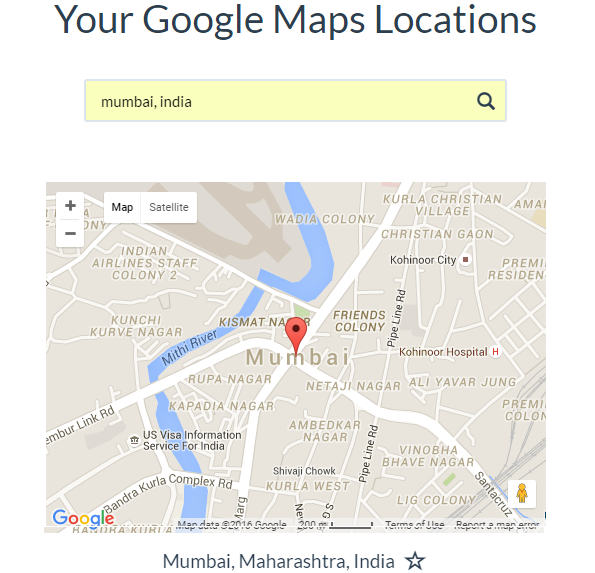 Here in this tutorial, we have just about learnt how one can use React to create a very simple web-based application. With this, you now have a basic idea about how to go on in creating web application with the help of React.

Besides this, there is also plenty more to React and thus, you can expect to plenty more with the library it has.