Understanding the iOS 8 for Developers

In this article we are going to make an overview on the development of apps for iOS 8. We aim here to start from scratch yourself, until his career as an iOS developer.

What we need to develop applications for iOS are:
Xcode is an integrated development environment, produced by Apple itself.

With it we have the code editor, graphical tool for editing the application interface, and several other interesting tools such as a tool for debugging code.

The iOS SDK extends Xcode to include tools, compilers, and frameworks that the developer need during an application development.

The iOS SDK contains all the features that developers need to install, run and test our native applications developed for a device that runs iOS.

The whole architecture of iOS is divided into layers, and each layer have different frameworks, as we can see in Figure 1. 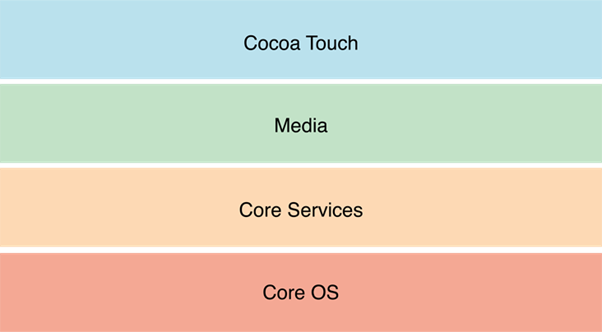 We will detail each of the layers presented so that we can understand them.

This layer provides a range of frameworks that are used for the construction of our apps. Among them we can mention frameworks for looking, multi tasking, touch-based input, push notifications, among others. This subject is vast, so we will mention some key features of this layer:

This layer provides the technology to facilitate the implementation and the development of multimedia experiences for users, for example, resources to design rich interfaces, audio and video. It's considered one of the most important layers, because, according to the philosophy of Apple, the developer should worry about offering a good experience to his users.

Among the features of this layer, we have:

This layer contains fundamental resources we use in application development. We can cite the two main frameworks of this layer, the Core Foundation and the Foundation. They define resources that almost all applications use. Let's take a look at some of the frameworks that make up this layer:

This is a low-level layer which is widely used by the layers of upper levels, even if it is not used directly, it is somehow used by other frameworks with higher levels that we will use at some point. The direct use of this layer usually occurs when we need to do an explicit security negotiation or communication with external hardware, e.g., via Bluetooth communication. Let's break down some of the frameworks of this layer:

Throughout this article we have a division of layers of iOS, and its frameworks. We can conclude that the architecture of iOS is organized in such a way that the resources we need to use for application development can be used through frameworks.

It is very important to know the platform architecture and their respective frameworks, as this will allow us to use more efficiently the resources that are available, and we can develop more and more interesting features.

Thank you for your attention and see you next time.

Information about the Media Layer
http://goo.gl/jG1CSt