Java 8 was released in 2014 introducing some amazing new features, including new streaming API, new APIs for date time manipulation, and JavaScript Engine Nashorn. Lambda expressions were also introduced in this new release and are considered Java’s first step into functional programming. These expressions were presented to eliminate overhead found while using anonymous class. This overhead can be a constructor or additional syntactical code. Lambda expressions were also introduced to eliminate the need of using anonymous class.

One issue with anonymous classes is that if the implementation of your anonymous class is very simple, such as an interface that contains only one method, then the syntax of anonymous classes may seem unwieldy and unclear. In these cases, you're usually trying to pass functionality as an argument to another method, such as what action should be taken when someone clicks a button. Lambda expressions enable you to do this, to treat functionality as method argument, or code as data.”

Need of Lambda Expressions in Java

An anonymous class is a local class without a name. The class gets declared and instantiated at the same time.

Even for effortless operations, additional syntactical code is to be written each time with anonymous classes. So, the main concern with the anonymous class is its unclear, bulky code i.e., overhead. Lambda expressions eliminate the need of using an anonymous class. It is a functional interface with a single method only. These expressions also provide a powerful, functional programming capability to Java.

In this example, we will see why lambdas were introduced.

As we all have used the popular functional interface java.lang.Runnable, we know only a single method is declared in Runnable interface i.e., void run() . If you have worked on creating a thread before, you will know the start() function is required to initialize the running of a thread. The start() method then calls for the run() method.

Below is an anonymous class, bulky and unclear code in comparison with the above code.

Now, let us focus on what a functional interface is and how it is related to lambda expressions.

What is a Functional Interface

Department is our interface and DeptInfo is the single abstract method.

o The role of a new annotation is definitely a topic to discuss. One may ask, what was the need of introducing a new annotation? Verifying the functional interface isn’t necessary, because a compiler will do it on its own. But, still it is suggested to specify @FunctionalInterface annotation to reduce the workload, just like the @Override annotation in earlier versions of Java.

If you already know that you’re going to use lambda expressions, annotate the interface with @FunctionalInterface.

Department is our interface and DeptInfo is the single abstract method, but we have also used the annotation @FunctionalInterface .

With the introduction of Java 8, a new package was added containing functional interfaces commonly used for lambda expression and method reference. The newly introduced package is java.util.function. Two of the interfaces are explained below.

Because it is a functional interface, BiConsumer can be used as a target type for a lambda expression or a method reference. It represents an operation that accepts two input arguments and returns no result.

Function , also a functional interface, can be used as a target type for a lambda expression, or a method reference. It represents a function that accepts one argument and produces a result.

For the complete list, refer to the officialOracle Java Docs.

The syntax of lambda expressions is different from what we have generally followed in Java. The general way is given below.

Here, argument1 and argument2 are arguments, type1 and type2 are their types i.e., data types -> is an Arrow Token

The structure shown above has the following parts:

A lambda expression can contain zero or more arguments.

More than one argument is separated by a comma (,) operator.

Note: The argument type (data type) can be eliminated while passing it to lambda expressions. That means (int x) and (x) are same i.e., it is optional to mention data type.

For example, both of them will work correctly.

Note: You can eliminate the () in the case of a single argument, if its type is inferred.

Here’s the type Dept of the parameter d ,

The body of the lambda expressions can contain zero, one or more statements.

Therefore, we can conclude that, the following are optional in lambda expressions structure: curly braces, return statement, type declaration, and parentheses around a single argument.

Let’s move further using a working example to understand how different forms of lambda expressions can be used in a Java program. Below, I have created a class and in which I am performing an addition and multiplication operation.

In the following image you can see the output for class LambdaExp, I have run it on Java 8 Online compiler.

Various types of lambda expressions define the operation() method of Calculate interface. Then we have defined the implementation of DisplayMessage() method of interface Display.

Here, for multiplication, we wrote the following that had int type declaration:

The above can also be written without type int i.e.,

Here, for addition, we wrote the following that had a return statement with curly braces:

We can also write the above without curly braces and without a return statement:

Variable capture occurs when a lambda expression try to use a local variable from its enclosing scope. However, this variable can only be used and should not be modified. Modifying it will cause an error since these variable are effectively final . The effectively final variable is a term which means that a variable whose value is never modified, once it is assigned initially.

Considering a snippet from the above example, we will add a local variable a and will modify it too. Modifying it will give an error, here's some part of the program we modified for our example on variable capture ,

Here, a is effectively final, so we used and added,

But, modifying it will give an error and the program won't compile. Here, we decrement the variable a by a-- , which means we're modifying it and as we mentioned it is illegal, so the following error is thrown, since it will remove the effectively final status from variable a ,

Here's the screenshot of the online compilation for the above program, 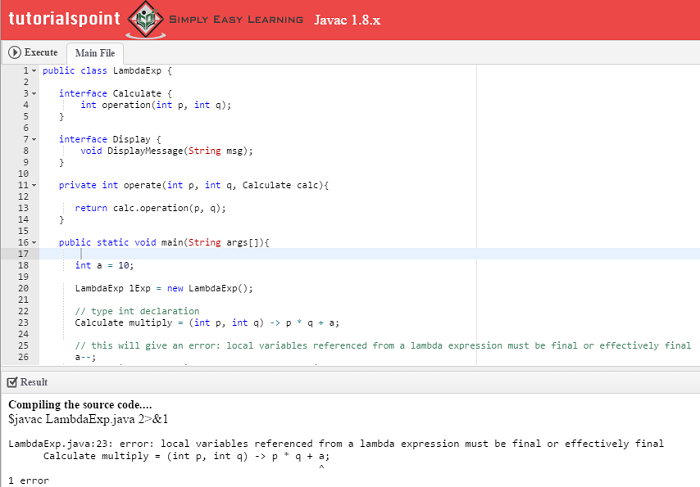 The concept of exception handling in any programming language is important and lambda expressions in Java also has a concept of handing exceptions. If checked exception is thrown, then the exception should be compatible with the exception listed. These excpetions are listed in the throws clause of the abstract method in the functional interface (shown in example below).

Here's a code snippet in which we have created a custom exception, MyException . In the class, we are calculating the sum, but while passing a zero-length array, it throws an exception with the message, " Exception! The array is empty! ". The exception is listed under the throws clause of calc() function, which is declared inside the functional interface SumCalc . 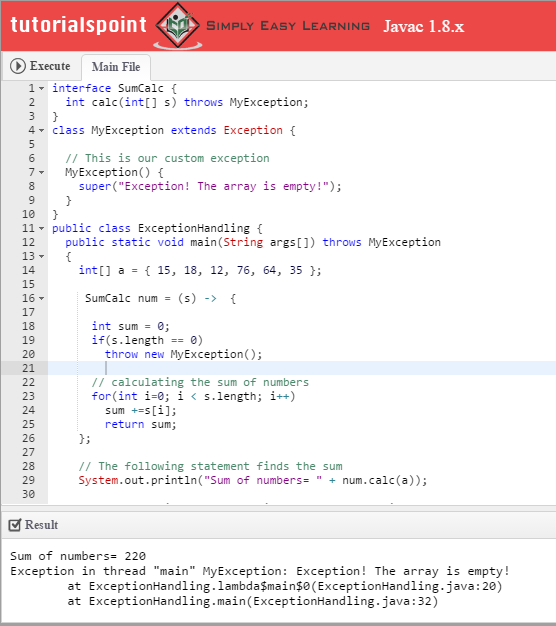 Lambda expressions were introduced in Java 8 to make it easier for developers to write clean and clear code. Anonymous class implementation is easy, but the syntax may seem bulky. Lambda utilizes a light-weight mechanism reducing overhead and eliminating the need of using anonymous classes.