The Life Cycle of a Servlet in Java

Servlet life cycle management is the most vital one. A Servlet is handled via an obvious life cycle that characterizes the way it is loaded, instantiated ad initialized, handles requests from clients and the means by which it is taken out of service.

As we all know that Servlets come in the shape of Java objects hence there are plenty of variations as far as loading and unloading of them is concerned. The time when a server decides to load a specific Servlet, standard java class loading techniques are made use of to come up with a class instance. Making use of the same allows the Servlets to be loaded from any part of the network.

The server uses the init method of the Servlets to load the same. Prior to the client requests are taken care of, the initialization progression gets over and even before the Servlet is shattered.

Here is a simple and brief explanation on the process

Step1: Server is loaded and the Servlet is initiated.

Step2: There will be either no requests or quite a number of requests that the Servlet will be taking care of.

Step3: Servlet is removed by the Server. In some cases this step is performed only after the server gets shut down. 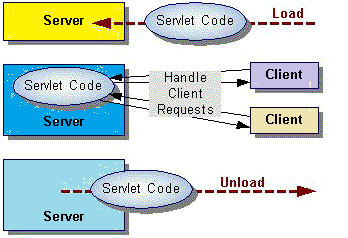 The real loading and implementation of the Servlets is clear-cut enough--when a client association is established and the Servlet is not in memory, it is loaded. However, a Servlet can be loaded if it has not yet been tackled with. A servlet can be loaded moreover at start of the server or vigorously when it is contacted.

Refer to the below for the signature of the method adopted to load and unload the Servlet.

The Servlet persists in the server, and is not reinitialized for each request. The life cycle of a Servlet is:

Determination of Servlets loaded at the Start-up

In order to determine which Servlets are loaded at the start of the server, the java web server consists of the administration section where all this details are captured. This permits the Servlets to be prepared in memory for the first client request to come in.

“Servlets that are expected to be most commonly and frequently used are loaded or installed at the start of the server”.

The response time for all the requests at the time when the Servlet is loaded at the start of the server is kept to a minimum. This reduces the wait time for the Servlet to be loaded.

There can be situations when the unloading of a Servlet takes place just after the completion of the client requests and not like the usual method of doing the same which is after shut down of the server.

At the time of the request handing out phase, there can be numerous threads administering the service () method of a Servlet instance. The Servlet container can transmit several synchronized requests via the service method of the Servlet. Hence it is up to the developer to appropriately grip the concurrency.

Making use SingleThreadModal and defining doGet, doPost or service methods with corresponding keywords is not appreciated due to performance factors.

Dennis Kavanagh
You are on a good track, but the English is fractured...
[+1 year ago]    Answer it
[author] VARUN ARORA
Thanks for the feedback...will make sure the same is improved in the coming articles..At times it happens when the real concentration is on the code itself..anyhow Look out for the next articles..
6/12/2012 1:57am   Answer it
Services
Add a comment
Add to favorites
Mark as viewed
Add a note
+Java