In this article we will talk about Spring Framework in Java.

The following are some of the key benefits of using the Spring framework.

Spring framework is layered and has many modules. As discussed earlier, the modularity of the framework ensures that the developer can pick and choose the modules to be used and leave out the rest. The Spring architecture includes many modules for a variety of features required to develop an enterprise application. The modules also ensure a seamless integration of the spring framework with other frameworks like Struts, JSF, Hibernate, etc. 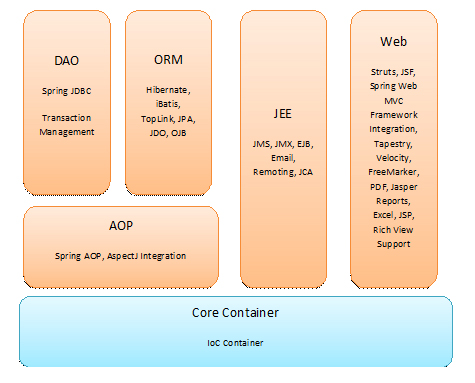 The Core: The core module takes care of Dependency Injection (DI), the most important feature of Spring Framework. The module includes a beanFactory that creates beans as per configurations specified in the XML file. This follows the Factory Pattern. There is an expression language module within the core container that provides strong expression language for querying and manipulating an object graph during runtime. The core module also creates the ApplicationContext, a medium to access any object defined and configured.

This module hides the lower level data access tasks like creating the connections and releasing them. This module also maintains a hierarchical list of meaningful exceptions instead of throwing database specific complicated errors. Transactions are managed using AOP. It is also possible to programmatically manage transactions.

Spring in itself doesn’t provide any ORM implementation. However, it allows for easy integration of other ORM tools like Hibernate, Oracle TopLinks, iBatis SQL Maps, JPA and the like. If the project doesn’t require ORM integration, this module can be completely ignored.

Spring has a well-developed MVC framework that allows for easy development of web application. It also allows for easy integration with other popular frameworks like Struts, JSF, Tapestry, Velocity, JasperReport and others of the like.

Dependency Injection (DI) is the most important feature of Spring framework. A general concept of Dependency Injection is called the Inversion of Control (IoC). Inversion of Control means that a class should not configure itself. Instead, it should be controlled/configured from outside. It is always better to keep the classes as independent as possible. Dependency injection helps achieve that. Instead of having a class calling another class through code, dependency injection injects the dependency at run time. For example, if class A is dependent on class B, then the container injects class B into class A during runtime. Class B can be injected into class A through one of the two options

No matter which of the above is used, dependency injection ensures that classes remain independent and separate as much as possible.

In Spring, dependency injection is carried out by the Spring IoC container. The container injects the required objects based on Bean configurations.

The class above has a setter with IGenre parameter. The PlaylistCreator is dependent on Genre to create the playlist.

Here is the Spring configuration for DI.

Dependency injection isn’t entirely a Spring concept. It can also be achieved directly through java. However, Spring has made dependency inject much easier and simple to use.

Creating objects around dependency injection allows quick application testing. For example, if a class needs a data access object, during testing, it is possible to easily mock the DAO by injecting a mock DAO without having a database . Thus it saves time and cost by simulating complex set up, merely by injecting desired mock objects.

That is all for today’s article. See you next time

andrey.b.nikitin
Hi, In @benefits@ "Spring web-framework is a well-defined web MVM framework. That means it is no longer required to use other web frameworks like struts." DId you mean MVC FRAMEWORK ?
[+1 year ago]    Answer it