Restoring Security in Tomcat with BadInputFilter

Some technical books are more useful than others, but one that is, in fact, extremely useful is "Tomcat: The Definitive Guide (second edition)" by Jason Brittain and Ian F. Darwin. Even this book being written for Tomcat 6, most of it is still applicable for Tomcat 7, currently the latest stable version. If you use Apache Tomcat this book is an invaluable reference.

Brittain & Darwin provide a thorough introduction to the configuration and implementation of Apache Tomcat in production environments. The book also provides the source code for a couple of useful classes named BadInputFilter and BadInputValve, which can be used to filter potentially dangerous requests. The problem is that these two classes rely on knowledge that is specific to Tomcat 6. In newer versions of Tomcat, BadInputValve does not compile, and a part of the functionality provided by BadInputFilter no longer works. Both the original version of BadInputFilter and an updated version available on SourceForge have this problem. In addition, the failure of BadInputFilter is silent, in the sense that there is no indication that he is no longer part of their work.

We will assume that you have programmed in Java and have some familiarity with the use of Java-based technology for web applications like Servlets, JSPs, and so on. I also assume that you know what role it plays in Tomcat these types of applications. Provide a brief introduction to filters, in order to give the context for the rest of the article.

So what is a filter? As described in the Javadoc for the Filter interface, a filter is an object that does the filtering tasks either on the request for a resource (for example, a servlet or an html file) or in response to an appeal or both. More than one filter can be applied in a chain to a resource or a collection of resources, which is an excellent example of the standard chain of responsibility. Figure 1 illustrates the use of filters in a web application. 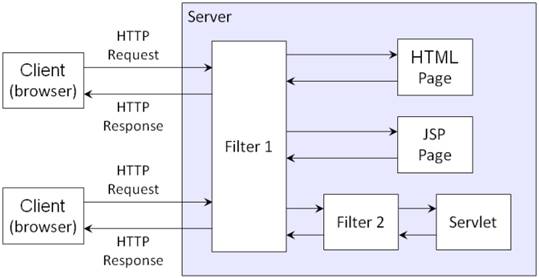 Examples of uses for filters include:

One of the cool things about filters is that they can be added to an application after the fact. For example, suppose you have an existing web application, and you decide you want to record some special messages when the applications are received by certain web resources. You can rewrite the part of the application that serves these features, or you can simply write a filter that intercepts requests for resources, records the message and then forwards the request to be treated in the normal way. In the second approach the existing web application remains unchanged except for the deployment descriptor of the web application, an XML file named web.xml which specifies the existence of the filter and the resources to apply.

Valves are similar to filters except for three very important differences:

If a web application is not designed with security as a requirement in mind, it is likely to be vulnerable to external security attacks, cross-site scripting (XSS), HTML injection, and SQL injection. The BadInputFilter is designed to check the potentially dangerous user input and filter the bad requests. Although you should probably take additional security measures, you can think of BadInputFilter as a first line of defense for some security holes of well known web applications.

Essentially, BadInputFilter analyzes user requests for possible problems. If a problem is found, it performs one of two actions - either (1) that prohibits the solicitation or (2) which falls outside the entrance of bad user. Performing these actions in a filter allows you to implement the code once and then easily apply it to several (or all) of the features within the same web application.

A series of web security breaches involve the introduction of characters or phrases that have special meaning within the context of HTML, JavaScript, or SQL. For example, if the user input is not properly validated or escaped, you can enter the JavaScript that runs on the server or that reveals information about the server environment. As an example, escaping user input, you may want to look at all the left angle brackets occurrences or right ("") and replace them with HTML entities/XML equivalent ("", respectively). Thus, user input containing the (indicating possible JavaScript code) would be harmless in most cases, but still fairly presents echoed back to the user as part of an HTML response page.

In his book, Darwin Brittain provides a test JSP page (input_test.jsp) that can be used to see how the various user input filtered and unfiltered are treated. Configuring BadInputFilter to filter requests for this test page shows that BadInputFilter no longer escape user input as originally planned. The reason the BadInputFilter flaw is that it relies on Tomcat 6 implementation details.

Here is a brief description, from an implementation perspective, of why the BadInputFilter failed. Filters have access to user input through a type HttpServletRequest object. For a HttpServletRequest object, the getParameterMap() method must return an immutable Map containing the parameter names and values. In Tomcat 6, the immutability of the object could be circumvented through reflection to gain access to setLocked() method and then using it with a false parameter, simply unlocks the immutable map. With Map unlocked, it was possible to change the names and/or parameter values. In later versions of Tomcat, using this approach to unlock and modify the request parameters would not work, but the failure is silent. There is no apparent fault indication anywhere in the system, or on a web page or in a log file. User input is simply passed unchanged - meaning it is not escaped.

As already described, HttpServletRequest has a method called getParameterMap() which returns an immutable Map, thus mapping the parameter names to values. But in order to "escape" user input, you need to be able to modify these names and/or parameter values. The question is how to modify an immutable Map. Obviously, you can not modify the map directly (or at least you should not be able to modify the map), but you can wrap around the HttpServletRequest in a HttpServletRequestWrapper, which can be passed on to the target resource in place of the original request. The request "wrapped" (wrapped) copies and escapes the names of the original parameters and values that the target resource, then have access.

Whereas parts of the implementation of BadInputFilter still work properly (eg, boot code, and the part that prohibits the user input by sending an HTTP response status code 403), the easiest way to illustrate the correction for the version of Jason Brittain of BadInputFilter is to create a new version, which extends the original version and then just replace the methods that need to change. (This approach is known as implementation inheritance.).

The source code for the new version of BadInputFilter is shown in Listing 2. The essence of the changes can be summarized in:

The book Brittain & Darwin contains sample configuration settings for the BadInputFilter that can be added to the deployment descriptor web application (web.xml). Listing 3 shows an example of configuration code given in the book.

First, Eclipse Kepler (4.3.1) and the Java 7 will give several warnings related to generics when compiling the original version of BadInputFilter. This is not surprising, because the original code was written when generics were relatively new to Java. At one point in the original code of Jason Brittain SuppressWarnings there is a note to get rid of such notice, but other warnings are now. There are several ways to get rid of these warnings, but following the Jason code can simply add SuppressWarnings notes as follows:

If you develop and/or maintain a website that is open to the public, you should anticipate that someone will try to break it at some point in time. One way to reduce the vulnerability of your website is by validating all user input. The BadInputFilter class was originally designed to provide a defensive front line for several security flaws in web applications well known for applications for filtering and prohibiting the application or escape potentially malicious input. With the latest versions of Tomcat, a part of the functionality provided by BadInputFilter no longer works. In this article we have seen some changes to the BadInputFilter that will restore the lost functionality. Moreover, unlike the original version of BadInputFilter, the updated version does not depend on the implementation of the Tomcat and should work correctly on any Servlet/JSP container.

shaikh
Hi Thanks for the detail explanation. But there is a bug in the BadInputFilter --> filterParameters() method you cannot modify map when iterating over it. you need to use concurrent map. e.g. below code will throw java.util.ConcurrentModificationException error paramMap.remove(name); paramMap.put(newName, values); Thanks, Shaikh
[+1 year ago]    Answer it
Services
Add a comment
Add to favorites
Mark as viewed
Add a note
+Java