In this article we will learn about REST Architecture elements and REST Constraints.

In REST, the various software that interacts with one another are called components. They are categorized by roles summarized in the table below:

Details of standardized format of a URI are as follows:

These constraints don't dictate what kind of technology to use; they only define how data is transferred between components and what benefits we get following the guidelines. Therefore, a RESTful system can be implemented in any networking architecture available.

Let us see what each of these constraints mean:

This is a major constraint and it simply requires the existence of a client component that sends requests and a server component that receives requests. After receiving a request the server may also issue a response to the client. This constraint is based on the principle of Separation of concerns.

Note: Concerns are the different aspects of software functionality. For instance, the "business logic" of software is a concern, and the interface through which a person uses this logic is another. The separation of concerns is keeping the code for each of these concerns separate. Changing the interface should not require changing the business logic code, and vice versa. Model-View-Controller (MVC) design pattern is an excellent example of separating these concerns for better software maintainability.

Applying separation of concerns: Client-Server as in the diagram above:

The notion of statelessness is defined from the perspective of the server. The constraint says that the server should not remember the state of the application. As a consequence, the client should send all information necessary for execution along with each request, because the server cannot reuse information from previous requests as it didn’t memorize them. All info needed is in message. 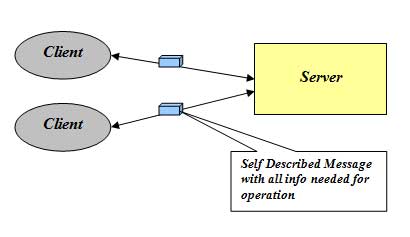 REST includes cache constraints so that the "second fetch" doesn't have to be made at all if the data is already sitting in your local cache (or can be a request that only uses partial network resources if the cache is an intermediary or server-side). If your data can be designed in such a way to take advantage of this, you can reduce total network traffic by orders of magnitude. 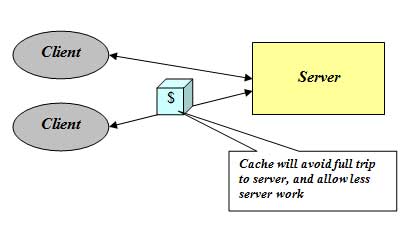 The uniform interface constraint at a high level means the interface for a component needs to be generic as possible. It simplifies and decouples the architecture, which enables each part of the architecture to evolve independently. 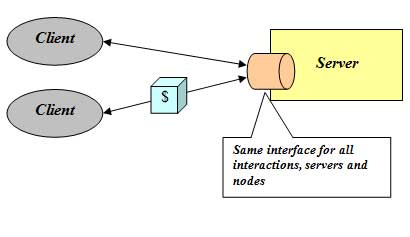 These will be discussed later in the chapter REST Key Concepts

There are many layers between the client and the server. These are called intermediaries and can be added at various points in the request-response path without changing the interfaces between components, where they do things to passing messages such as translation or improving performance with caching. Intermediaries include proxies and gateways.

Note: Proxy is an intermediary selected by a client, to provide interfaces to services like data translation, performance enhancement, or security protection. Gateway is an intermediary imposed by the network or origin server to provide an interface encapsulation of other services, for data translation, performance enhancement, or security enforcement.

By applying a layered system constraint:

Code on demand is an optional constraint. It allows a client to download and execute code from a server.

By applying Code on demand constraint:

This article tried to explain the architectural elements of REST and REST Constraints concisely. Hope you likes the article.