PHP Server: How to Setup AMPPS and Execute PHP Programs

In this article we will see how to setup a PHP server and study some basics of PHP and execute some simple programs. In this case we will use the AMPPS as PHP Server.

The PHP is an acronym for Hypertext Preprocessor. It is a programming language which allows web developers to create dynamic content that interacts with databases. It is widely used open source scripting language. PHP scripts are executed on the server. PHP is basically used for developing web based software applications.

PHP file contains text, HTML, CSS, JavaScript and PHP code. As PHP scripts are executed on the server, the result is returned as plain HTML in the browser. PHP files have extension “.php”. PHP can send and receive cookies. It can add, delete and modify data in the database.

PHP is server side scripting which need three things to make this work :

First of all, we need to install PHP server. We can use AMPPS, which is a free stack of Apache, MySQL, MongoDB, PHP, Perl & Python for Windows, Linux and Mac. This is created by Softaculous Ltd. a company. The following steps explain the install and setup on windows platform. Follow these steps for installation:

· Once the dowload is complete click on the AMPPS setup. Next Ampps Setup Wizard window will open. 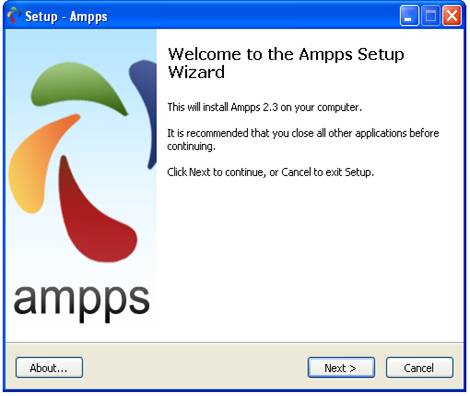 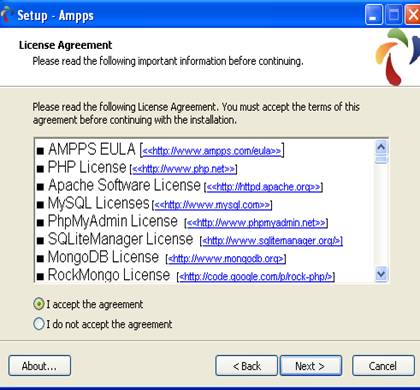 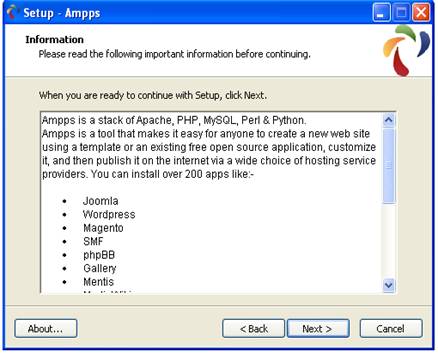 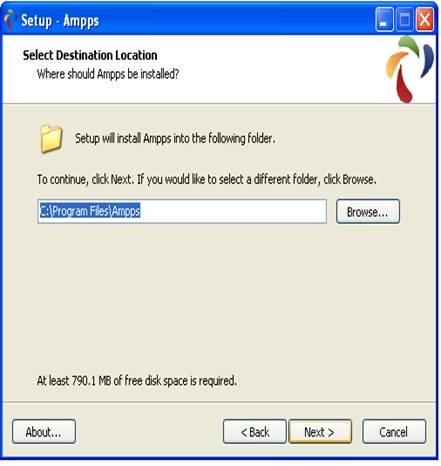 Figure 4: Choose the folder to install 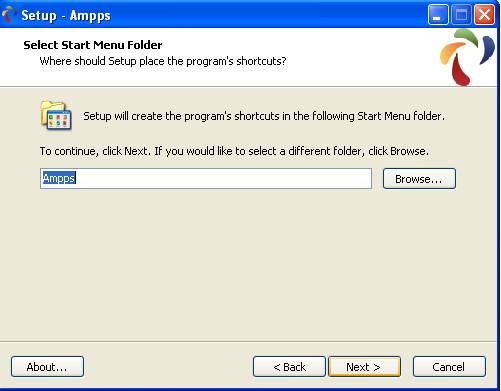 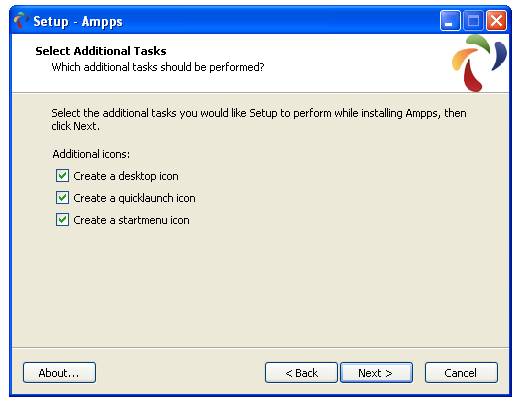 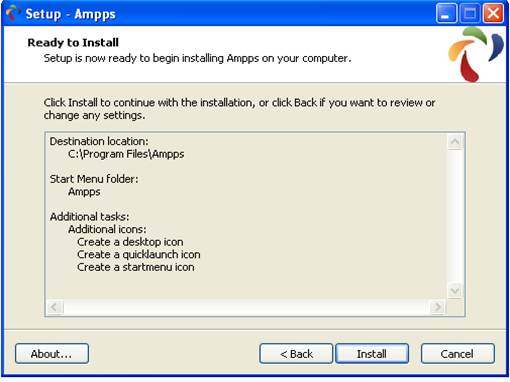 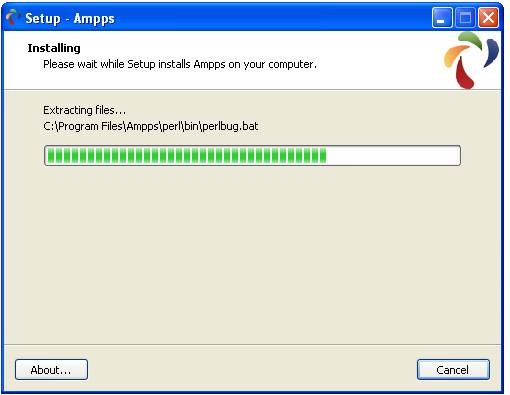 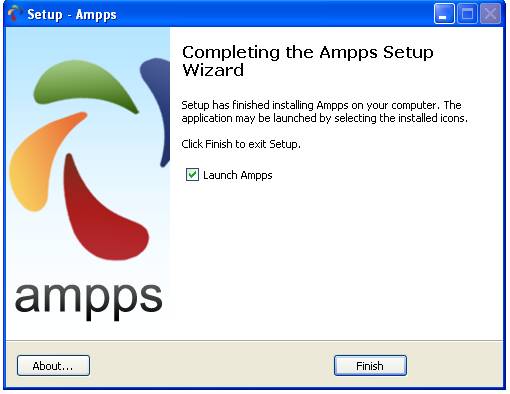 Now that the server is installed let us try out a simple example. Before that let us understand the syntax and basics of PHP in the following sections.

In the all programs below we follow these steps to execute the programs:

A PHP starts with . PHP script can be placed anywhere in the document.

Following code describes the simple code of PHP, which prints the “Welcome to PHP programming language.

A comment in a code specifies that the particular line is not going to execute. It is not read as part of the program. There are two types of comments.

Single-line comments are used for short explanations to the local code.

Multi-line comments are used for detailed explanations, which are more than one single statement.

PHP is case sensitive language. In PHP, all user defined functions, classes and keywords are not case sensitive. For example consider the following:

Variables are containers, which are used to store the information in the middle of the PHP program. In PHP, variables can be declared anywhere in the script. Following are some important things that we all need to know about PHP variables:

A data type is set of values and allows operations on those values. In PHP the programmer doesn’t set types of variable. PHP decides the data type of variables after interpreting the web page. PHP supports eight primitive data types.

An integer is a whole number that can be positive, negative, or zero. It is number without decimal point. An integer must have at least one digit and it cannot contain comma or blanks. When you are declaring integer variable, you can declare as given below:

You can also define variable without data type, in such cases PHP will try to determine type of variable based on the value hold by that variable.

A Double is a larger float-type that holds both bigger and more precise numbers. Doubles are used to specify floating-point numbers. When you are declaring double variable, you can declare as given below:

You can also define variable without data type , in such cases PHP will try to determine type of variable based on the value hold by that variable.

Boolean is a data type having only two possible values .It can be either TRUE or FALSE. Any non zero or non empty strings are also considered as TRUE. When you are declaring double variable, you can declare as given below:

You can also define variable without data type , in such cases PHP will try to determine type of variable based on the value hold by that variable.

When a variable has no value, it considered being NULL. NULL is the only possible value of type NULL and is the case-insensitive keyword NULL. It identifies whether variable is empty or not. You can empty the value of variables by setting the value to NULL.

The NULL variable can be declared as $b=NULL;

Strings are sequences of characters. It is used to represent text rather than numbers. It can be represented by single quotes or double quotes.

An Array is a compound data type, which contains multiple values in one single variable. If you wanted to add list of items to a variable, you would be creating an array.

Object variables are owned by each individual object/instance of the class. It is compound data type, which contains any number of variables and functions. To initialize an object, you can make use of new statement to initialize object to a variable.

Resources are special variable that hold references to resources external resource. Resources are created and used by special functions. The following are some of the functions, which create, use PHP resources.

Constant is a name or identifier for a simple value. As the name suggests, Once they are defined they cannot be changed. The value of the constants cannot be changed during runtime. Constant is like a variables used to store the information. A constant is case-sensitive by default.

Difference between constants and variables

An operator is a something that takes one or more values or expressions and yields another value. Operators are used to perform operations on the given values. Operators perform actions on operands - they modify values of input. PHP language supports following type of operators.

Anarithmetic operatoris a mathematical function that takes two operands and performs a calculation on them.

Logical operators are an instruction in which the quantity being operated on and the results of the operation can each have two values.

Acomparison operatoris a binary operator that takes two operands whose values are being compared.

It will produce following result:

Conditional operatorsare used to evaluate a condition that's applied to one or twoboolean expressions. It is also called as ternary operator. It has following syntax:

In above syntax, expr1 is a condition when satisfied or true it evaluates expr2 otherwise expr3, for example:

The following are the functions, which are commonly used to manipulate strings in PHP.

The PHP strpos() function is used to search string position where the character is present. When the strpos() couldn't find the character then it returns false.

The strlen( ) function is used to determine the number of character presents in the string along with space and special symbol.

Concatenation Operator is used to join the two different strings and then represent it as one string. To concatenate two strings, use the dot (.) operator.

It will displays the following result:

In this article we saw how to set up a PHP server. We also studied PHP basics and how to execute some simple PHP programs. Hope this article helps you kick start with PHP.