Node.js is one of the strongest frameworks of nowadays, and its functionalities go further than simply executing JavaScript on server side, but also allowing Web Services consumption. Here, well see how to consume a WS with JSON and Node API.

JavaScript is everywhere, from modern browsers to mobile phones. It is also very useful in building modern web applications from scratch.

In this article, we’ll use Node.js in the backend to collect information about different users . The application will be command line so you’ll also learn how to use Node.js from command line or terminal.

Installing Node.js on your machine

Head over to https://nodejs.org/download/ and download the required package for your Operating System and simply install the package similar to installing a software on your machine.

While installing Node.js make sure that ‘npm’ installation is checked. npm is node package manager and is used to install different packages to be used by Node.js applications. 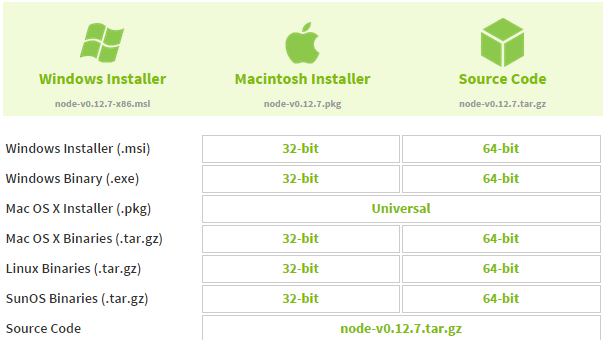 Figure 2. Make sure to install npm

After you’ve installed node.js, open up a terminal on your machine and type

You’ll see the current version of node.js installed on your machine.

You’ll see the current version of npm installed on your machine.

If the above two steps are executed successfully, then you’ve installed node.js and npm on your machine. If not, then repeat all the steps again or post comments in the discussion to solve your problem.

Open up any text editor and create a file named “app.js” and write the following line of code!

console.log in JavaScript is used to log or print a line of text on the command line or terminal. In this case we’re writing “Hello, World” in our console.

Open up the terminal and make sure you’re on the desktop (if your app.js file is in desktop) and type the following command:

To run the application on Node.js platform we’ll use “node filename.js”.In this case we’re using node app.js because the name of our file is app.js. So, here you can see that we’ve got the output “Hello, World.”

We’ve created our simple application in Node.js which logs Hello world on the console. Now it’s time to write an application capable of retrieving information from the web.

Starting with our Node.js application

We’ll build a command line application that will get student’s badge count and points from team treehouse website.

If we use ‘.json’ at the end of the url then our browser will display a JSON (JavaScript Object Notation ) page. This page contains all the information that we’ve got using our Node.js application:

The above two screenshots of the url : https://teamtreehouse.com/joshtimonen show the JSON data and here we can easily see that there is an array of badges which contains all the information of different badges earned by the user. In the second screenshot we can see that there is a JavaScript Object named as ‘points’ and inside this object we can see all different skills of the user with his/her respective point.

So, our problem is divided into these sub-parts =>

In the next section, we’ll start with reading the data with the help of Node.js modules.

Reading the data from the API

We’ll use one of Node.js built in module ‘http’ to go out and make a GET request.

First, we’ll start by building a function which will print out our final result on the console. We’ll print the total badge count and the total points in JavaScript. We can fetch any information from the JSON which we are using!

Now we’ll use ‘http’ module of Node.js to retrieve data from the web.

In the above screenshots of our file app.js we’ve first included the http module of Node.js using the statement => var http = require(‘http’);

So, this will include the http module in our file. In the next block of code we’ve created a function called ‘get’ which takes username as argument. This function will go to the web and will fetch all the information which was in the JSON file and will store it in a variable called ‘body’.

We’ve first initialized the variable ‘body’ as an empty string. We’ve created a variable called request which will call the ‘get’ method of the http module.

The first argument takes the URL of the webpage and the second argument is a callback function of JavaScript which takes response as an argument.

We are storing the information in the variable called body. When we transfer data from the web, the information is passed in the form of small chunks of data and we’ve used response.on, which will again and again receive the small chunk of data from the treehouse API. In the next line, we’ve used => body += chunk. This statement will append the received information in the variable body again and again until we’ve manually stopped the process.

So, in the next step we’ll use another response to stop the response when the data transmission is finished.

Make sure to add this piece of code inside the get function that we’ve created earlier.

Inside the if block we’ll parse the data received to convert it into useful information. We’ll look into this in the next section.

We’ve the response as a string but we need to convert it into an object so that we can access the data more programmatically. The process of converting a string into a data structure is called parsing. You may not know this, but if you look in the documentation on how to parse JSON, it is not found as host object in the Node.js environment. It is actually a native object. A good reference for native object is MDN.

There is a method called JSON.parse() where you can pass in a string and it’ll return a parsed JSON Object.

Let’s write the code for this part of our application.

Here we are using exception handling to deal with the errors.

Inside the try block we’re creating a variable called ‘profile’ which will store the parsed string.

In the next step, we’re calling the function printMessage which we’ve created earlier to print the required information on the console. You can see the profile is now a JSON object and we are using profile.badges.length to calculate the length of the badges array (length of badges array will be equal to the total number of badges earned. You can see the JSON for more clarity). In the next argument we’re using profile.points.JavaScript to get the total points in JavaScript domain.

The first argument is ‘username’. We can either directly pass the name of the user or we can opt this method.

The above statement will store the name of the user in the variable username and then we can pass the variable ‘username’ as argument.

Remember that we’ve assumed that the status code is 200 always. What if it’s not 200? Then, we’ll not enter the if block and in the else block we’ll call the printError function!.

At the end of our app.js file we’ll add this line of code so that we can use the methods of this file in different files.

We’ll create another file named profile.js and add these lines of code.

We’re including our app.js file in profile.js and then we are using process.argv to get the name of the users from command line, and then we’re iterating with the help of forEach loop to get information about different users.

Source code available at => https://github.com/samarth4487/studentInformation, or at the top of this page as a zip file.

This is only a small piece of all the power Node.js can give us. Please refer to the official documentation of the framework and check the other samples it has available. With this, you'll have all the necessary inputs to create your own apps.