In this article we will talk about JTA and we will perform simple transaction with the help of Java Transaction Api.

The JTA is a service oriented specification of API and helps the applications in order to perform the distributed transactions and the transactions are able to access and update the data on the resources of two or more than two computers in a network in efficient manner. With transaction, it basically means the logical work which succeeds when the process and work is completed fully and when the work is done and the results are according to the correct assumption then this type of transaction can be called as a successful transaction.If there appears no result of the applied transaction then it can be called as an unsuccessful transaction. In the case of transaction from an application to the local database, there will be the need of an application, the resource manager and the resource adapter respectively in order to access the relational database system and perform the transaction.

In this API, every resource consists of an API respectively like the databases access need JDBC API and the java message service need JMS API in order to access the messaging services in an application.The transaction manager decides to complete the transaction process successfully and make the decision either to commit or rollback the required distributed transaction.

The components which are basically present in the Distributed Transaction Processing (DTP) model and to complete the transaction in a successful manner involves the following which includes an application, an application server, the resource manager, the resource adapter and a transaction manager. The components involved in the transactions which are distributed should be considered as the processes that are independent from each other with respect to location. It is possible that many different components are available in one machine and there is also a possibility that these components are present among different machines.The packages of java should be imported in an application where this API is required to be used and these packages are javax.transaction.* and javax.transaction.xa.* respectively.

The resource manager mainly consists of its own API in order to use the resource and access the functionality like there is a JDBC API for the access and in order to perform the create, read, update and delete (CRUD) functionalities related to the database systems respectively and similarly for other resources the respective API is used in order to completely get benefit from the used resource in the particular application where these functionalities and related operations are needed. There is an application which basically communicates with the transaction manager in order to begin, commit and rollback the transactions that are needed and to be performed to complete the work of application in a successful and an effective manner.All the related work of transactions is successfully done by the use of JTA which uses special interfaces available in the respective packages.

Following are the screenshots of the transaction work: 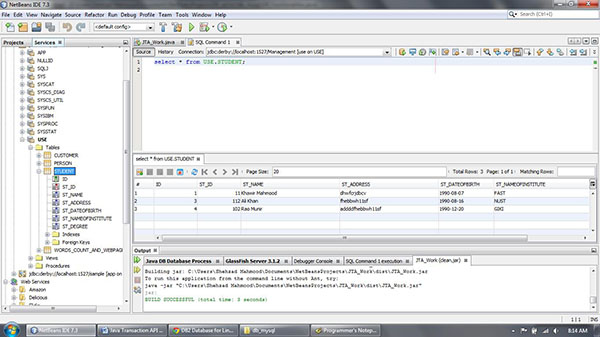 The Figure 1 shows the tables that are available in the database system which will be used in the application of JTA. 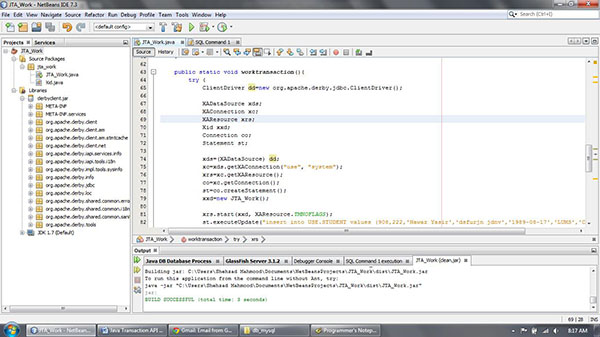 Figure 2: The files and libraries in this application of JTA

This Figure 2 shows the hierarchy of files and libraries in the application of JTA_Work.

This is an abstract class in which three attributes are declared.

Hope you liked it. See you next time.