In this article we shall see an overview of REST (REpresentational State Transfer) and some of its features.

REST is an acronym and stands for REpresentational State Transfer. REST was first described by Roy Fielding in his PhD thesis, published in 2000. Over the years it has gained acceptance as a better and easier alternative to SOAP and WSDL (Web Service Description Language).

REST is neither a framework nor a technology.

“REST is an Architectural Style built on certain principles using the current HTTP web fundamentals”. The above definition can be put in the following simple diagram: 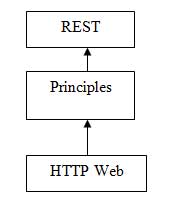 Here we come across two words “Architectural style and Fundamentals”. Let’s see what they mean:

In the software world we have three terminologies which might confuse us they are: Architecture pattern, Architectural style and Design pattern. Following we have detailed the differences between the three:

Fundamentals are leveraged to create REST services. There are basically five fundamentals or principles:

We also need to understand a one more jargon called constraint which is often associated with REST. According to the REST thesis by Roy Fielding, a constraint is a rule that induces one or more software architecture properties. A group of constraints is called a style. The REST style is a group of six major constraints that induce the various properties needed for the Web. In order for architecture to be viewed as REST architecture, it must satisfy all of these constraints. They are:

Roy Fielding defines the non-functional property set that he uses to evaluate various architectural styles against one another: 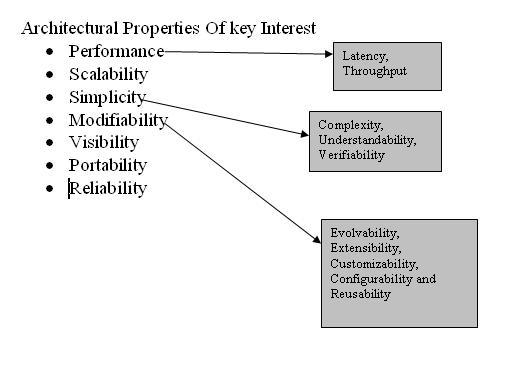 A REST based system should exhibit the above architectural properties or goals. An explanation for these is as follows:

The term performance means different things to different people. To end users, high performance means that when they click on a link, or click on a buy button on an e-store, they get immediate results; to developers, it means solving the typical problem of service availability and supporting architectures that are scalable.

REST can support the Performance goal by using caches to keep available data close to where it is being processed. It can further help by minimizing overhead associated with setting up complex interactions by keeping each interaction simple and self-contained (as a request-response pair).

Scalability, in the context of the Web, means to consistently provide service regardless of the increase or decrease of web users.

REST-style architectures support load balancing across service instances via the Layered System and Uniform Interface constraints. This can be further simplified through the Stateless constraint, which structures interactions as request-response pairs that can each be handled by services independently of other requests. There is no need to keep directing the same service consumer to the same service instance or to synchronize session state explicitly between service instances; the session data is contained in each request.

By separating the functionality within components in a system, we can induce the simplicity to the architectural styles. If functionality can be allocated such that each component is less complex, then they will be easier to understand and implement.

The major contribution of REST to Simplicity is the Uniform Interface constraint. Overall system architecture is simplified and the visibility of interactions is improved. The functionality encapsulated by services is abstracted from the underlying interface implementation.

The requirements for any architecture are bound to change over time. Modifiability represents the ease at which changes can be incorporated in the architecture.

Modifiability in REST-style architecture is further broken down into the following areas:

Modifiability is particularly important for larger distributed architectures where it is not possible to redeploy the entire environment every time an architectural improvement is made.

Visibility refers to the ability of a component to monitor or mediate the interaction between two components. REST supports visibility through Uniform Interface constraint. Visibility can enable:

Portability represents the each with which a system can be moved from one deployed location to other.

Reliability of a distributed architecture is the degree to which its solutions and services (and underlying infrastructure) are susceptible to failure. An architecture style can improve the reliability by avoiding single points of failure, using failover mechanisms, and relying on monitoring features that can dynamically anticipate and responds to failure conditions.

In this article we saw an introduction to REST architecture. Hope you liked it.