This article guides the users to use of CSS selectors. In brief, we will learn the process of using selectors to build a simple page layout.

Let us start from the very basic definition of selector. Selectors are the most important aspect of CSS. They are used to select elements on a HTML page. The selected elements thus can be styled according to the need and demand of the users. CSS selectors are of various types. Basic introduction to different type of selectors is as follows:

Attribute Selectors are not supported by the earlier version of browsers.

In this article, we will be briefly discussing the first four type of selectors i.e., type selector, ID selector, Class selector and descendant selector. In order to start the process of using CSS selectors, user needs to create a page. The first step is to create a blank document. In this write an XHTML code. The document should be saved using any preferred name by the user. Let us suppose the name of the saved file is “usingCSS-selectors.htm”.

Listing 1: Shows the HTML code to create the “usingCSS-selectors.htm” file.

Figure 1: Shows the screen shot after opening the file “usingCSS-selector.htm”.

Now, we have performed the task of creating a blank document. Now, let us begin using CSS selectors. The first step here is to again create a blank document and save it in the same folder where “usingCSS-selector.htm” file is saved. Let us name the file as “different-selectors.css”. After this type, we will apply the four different types of selectors which we have studied above. Let us begin with Type Selector.

As we have studied, type selectors are the most basic and simplest type of selectors to be used. In order to use this selector, type the following code in “different-selectors.css” file.

Listing 2: Shows the code to be added in “different-selectors.css” file

The above code will help the user to select and style the following elements on the page: 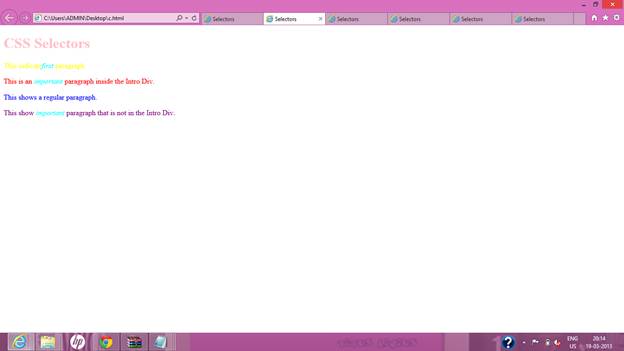 Figure 2: Shows the screen shot after using the type selector

Now, let us discuss ID selectors. For this, user needs to have a look at the “usingCSS-selector.htm” code again. Users will see that we have a <div> element with an ID of intro. This element acts as an ID for the intro section of our page. In brief, ID selectors are used to define the uniqueness of the element. So, in order to access the ID, users need to add (#) in front of its ID’s value. To access this type of selector, add the code in “different-selector.css” file. The code must be added directly below the <h1> rule.

Listing 3: Shows the code to use ID selectors 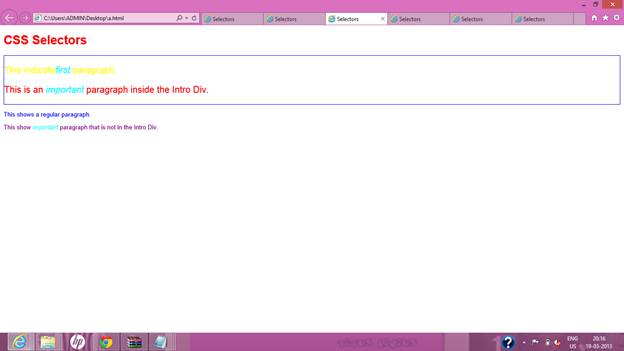 Now, let us discuss Class selectors. These selectors are very similar to ID selectors. We will differentiate both the selectors later. Let us learn to use this selector first. Users will notice that two of our paragraph tags have a class of “important.” When an element has a class we can access it with a CSS selector by placing a period in front of its class name. Let us add the following code to “different-selectors.css” file in order to use the class selectors.

Listing 4: Shows the code to be added for using Class selector 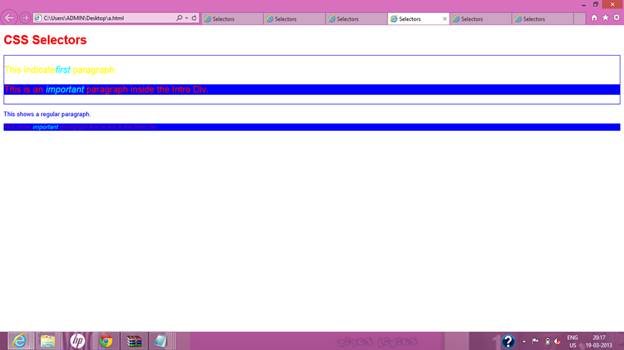 Now let us discuss the differences between ID and class selectors. Some of them are as follows:

After this, next come the Descendant selectors. In order to understand this, let us take an example. Suppose, if the user wants the important paragraph in the “intro” Div to look different than the important paragraph at the bottom of the page. In such a case, Descendant selector can be used by adding the following code to the “different-selectors.css” file.

Listing 5: Shows the code to be added to use Descendant selector 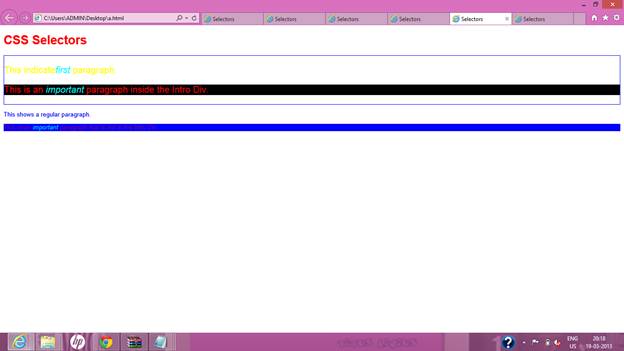 The above code is working in this way. First of all, it starts with “#intro” which will select the Intro Div. This is followed by a space, and then “.important.” So essentially the used selector is telling the web browser to do the following tasks:

Now, the colors inside the black paragraph can also be changed. Suppose, if the user wants to change the colour of word important to white from sky blue. To do this, following code is added.

Listing 6: Shows the code to perform the above specified task 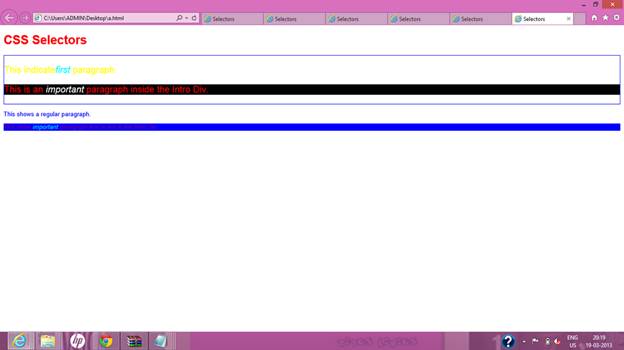 Figure 6: Shows the screen shot after applying the listing 6

Finally, in the article we have learnt about the different type of CSS selectors that can be used to style a HTML element. Hope you like reading it!


I have done my bachelor in Computer Science and I am well versed with programming languages such as JAVA, C#, html and done courses on Android development.