Introduction of Exception Handling in Java

In this article we will discuss in brief about the exceptions: Checked and Unchecked Exception and shows how exceptions can be avoided with the help of quality code.

The main issue everyone find with the exception handling mechanism is to when to use the same and how. Let us together by the means of this article try to see what the best ways available for exception handling are. The idea of the all the programmers like us is to come up with a quality code that instead of making the problems worst, resolves the same at the earliest. But the worst part is that, our code often faces the issue of exceptions.

No one in the world being a programmer likes to come across these sorts of exceptions as a harmful product to the code. So we have to find the solution in order to avoid the same. Let us see one of the simple examples that the programmers often use so as to avoid the exception.

What is wrong with the code above?

Once an exception is thrown, normal program execution is suspended and control is transferred to the catch block. The catch block catches the exception and just suppresses it. Execution of the program continues after the catch block, as if nothing had happened.

What will you say about the below code?

If you see there is no code in the method, it is blank. Nowhere in the world can any code with no method in it throw any sort of exception. Java will never ever stop block you in doing the same. Exception really needs to be controlled else it will make your code to run at a snail’s pace. This is because exceptions are famous for consuming your machine’s memory and also the CPU utilization so as to generate, throw as well as catching the exceptions. Excessive use of the same i.e. if not handled timely, these exceptions can make it really hard for the programmers even to read out the code.

Generally speaking, being a programmer, you can come across the following situations that can lead to the presence of the exception:

For example: Look at this code: NullPointerException and IllegalArgumentException. Error in programming can at times is not possible to be handled by the client code as well.

Two sorts of exceptions are classified by Java:

Checked Exceptions are inherited from the class known as “Exception class”. As far as managing these sorts of exceptions are concerned, it is done in a catch block. The other way could be transmitting it using the throws clause.

And then we have the unchecked exception category, where in we don’t see any need for the client code to deal with them. 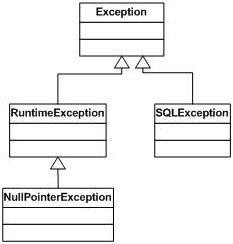 From the above diagram, we see that NullPointerException broad out from RuntimeException . So this is an unchecked exception.

There is a compulsory agreement on the invoking layer to catch or throw it for the exceptions particularly the check exception by a lower layer. The checked exception indenture linking the API and its client quickly modifies into an unnecessary burden if the client code is incapable to manage the exception successfully. Programmers of the client code possibly will commence taking shorter route by restraining the exception in a blank catch block or merely throwing it a thereby inserting the load on the client's invoker.

Consider the following example where the code displays violating encapsulations.