Introduction and Importance of Java Swings

What do you mean by Swings in java?

Swing, wing documentation to the AWT, comprise of novel and better mechanism that improve the look and functionality of GUIs. Swing can be deployed to come up with an altogether a Standalone swing Graphical User Interface software or applications and also the Servlets and Applets. It makes use of a model/view design structural design. AWT is not as portable and flexible as Swings are.

Component object and the UI one are being used to put into the practice the “view part” of the MV plan or design. On the other hand, Model object and Change listener help is taken to implement the “model view” of the MV design.

Built on the platform of AWT, Swing is basically written in Java language. The support of an AWT’s lightweight component assistance is taken so as to come up with the Swings.

Overall, the design or the architecture of the components or elements of Swings make it much simpler to come up with both the outlook/appearance and behaviour as well. The mixture of AWT and Swing elements or constituents permits it to provide Swing support to the current programs based on AWT.

Example includes, swing mechanism such as JSlider, JButton and JCheckbox could be deployed in the equivalent code with pattern AWT tags, text fields and scrollbars. You could subclass the active or current Swing UI, model, or change listener classes with no need to have rediscovered the whole functioning. Swing also has the skill to put back these matter on-the-tracks.

Classes that symbolize Graphical User Interface elements in Swings have names initiating with the alphabet J. Few of the illustrations include JButton, JLabel, and JSlider. Overall, 250 new classes and 75 interfaces in Swing are there and even more than that and this is double as many as AWT contains.

The class know by the name of JComponent, when moved down straight from Container, is the core class for majority of Swing’s user boundary constituents. 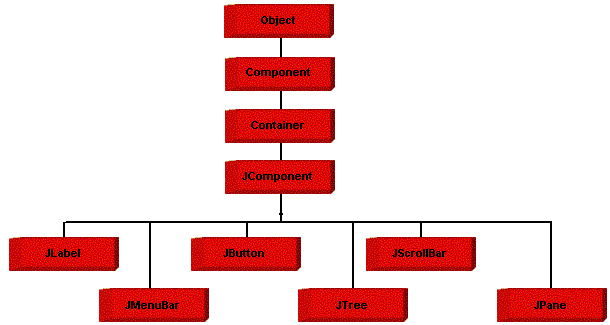 Swing consists of elements or constituents that a developer will be making use of to come up with a Graphical User Interface. Let us take a look at some of the most commonly used elements or components of the Swing. The programming know-how of AWT is not at all required to equip with these swing programs.

The conventional and the most famous Hello World program is our example for Java Swing as well.

The overall objective to bring this Hello World Program to you all is to teach on how a java program can be created, and then how to compile it and then execute or run the same.

Any Editor such as Text pad/Edit plus or the favourite of all, an IDE like Eclipse can be made use of to come up with a java source code.