How to use AJAX module of ASP .Net for animating a web form

In this article, we learn the process of animating the web form using AJAX module of ASP.NET.

Let us begin with various screen shots which are placed in sequence which illustrate the experience of the user. 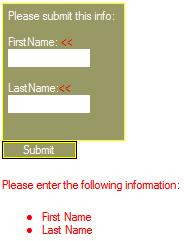 Figure 2: Shows the interface of the form when the user fails to submit the form

Now, let us consider an application with simple web page. For now, I will be considering even more simple form so that the users can understand the basics to the core. The elements that need to be styled are transferred to the ASP .NET theme folder. At the very basic level, the considered web form consist of 4 ASP .NET panel controls which perform different functions. They are as follows:

The process begins with working on the AnimationExtender and the Animation Sequence. The animation effect of the web form consists of two important concepts of ASP .NET. These concepts come under the AJAX module. They are as follows:

Listing 1: Shows the code for the markup of the Animation Sequence

The coding done for the animation sequence markup is very simple and easy to understand. Inspite of this straightforward coding, there is an important point that needs to be kept in mind. Here, the series of steps that are listed within the animation sequence markup must be followed in the order listed for the user to get the desired effect. A brief overview of the coding done is as follows:

The answer is very simple. The process of directly wiring the animating sequence to the submit button can be done. But this process has certain limitation which needs to be taken care of. This process of wiring runs effortlessly & effectively till the time user does not add any client side validator to his/her form. As soon as it is done, then the validators control starts to influence the submit action, but at the same time stops its process of influencing the animation sequence. So, in this case if the user attempts to submit the invalid data, then the animation is triggered regardless of the fact and form will fail in the validation process and render error messages on the screen.

Now, if the user tries to do it then he/she will get to see that an invalid form is simply animated without any real post-back happening. So, as a solution to the above posed question, or we can say problem, we will "call" the animation sequence at our discretion rather than trigger it with a click event and at the same time assigning the animation extender to another control such as the proxy panel. Now, as we use proxy panel, the client-side JavaScript comes into action.

Listing 2: Shows the code for the client-side JavaScript

Here, in this step, writing the code is not too difficult. The important point is to understand the things and processes that are begin happened in it. Some of them are as follows:

Here, other thing to be noticed is that the ID value of the submit button is cached in a global JavaScript variable.

After discussing the AnimantionExtender, animation sequence, proxy panel and the client-side JavaScript, the only that lefts is the Server side code which completes this process. In our discussion on the server side code, we have greatly simplified it in order to have complete emphasis on the animation sequence. As we know, that the data received from the web form is copied over to a couple of label controls as a part of the most of high-tech business processes. So, for this the server side latency is simulated by putting the execution thread to sleep for a few seconds or to be precise around 5-6 seconds.

Listing 3: Shows the basic server code for the click event of the submit button

Here, one important point needs to keep in mind by the users that the fading out of the panels is just a visual effect and will last only until the end of the post-back. During the time, the page is reloaded; the panels that are supposed to be stay hidden will change their mode to visible again. This has happened because all those panels are part of the UpdatePanel and this UpdatePanel is asynchronously refreshing. Because of this, in the next step, the form panel must be concentrated as invisible. Now, after all this, it is time for the wait panel to be in the hidden mode as well because the server has already completed the business process and is ready to respond.

Now, the final and most tricky step of this coding is to introduce the animation. This step would "fade in" the status panel into view on the browser during the period of page loads.

Listing 4: Shows the code for the complete server side

There are two most important things in this coding that are needed to discuss here. They are as follows:

After doing all this, we will see that the status panel is fading into the view of the screen and the submit button which is outside the UpdatePanel, will remain disabled. The procedure of re-enabling the button is to reload the entire page in the browser window.

In this article, we have learnt to animate the web form using ASP .NET. During the process of leaning, we went through the detailed discussion of AnimationExtender, animation sequence, Proxy Panel, Clent-side server and the server side code.