How to make a calculator in JavaScript

The intention of this tutorial is to make readers understand the process of creating a calculator using javascript.

The javascript involved in this tutorial is not too much extent and is very easy to understand. In the making of this basic calculator we have created 5 javascript functions, the first of which runs when the page loads. However before understanding each function, first you need to setup your html page.

The very first step is to look out for a header so each browser knows what to expect. Headers are not a part of this tutorial. However you can find loads of information by typing 'html headers' into google. So copy the code below and paste it into a blank document and then save it as 'calculator.html' in a folder called 'java-calc'.

You will notice the last line of the code above is referencing a style sheet (.css) for the reason that because we will need to make a style sheet in orders to display our calculator in a nice orderly format. Next we will insert the 5 functions that run this calculator.

The first thing we need to do is to create an instruction to the users’ browser that we are including some javascript code in the header section of the document. The command is very simple. Go ahead and copy and paste this code to your javacalculator.html document and save it.

Now we will need to setup a few variables. These are regarded as 'Global' variables as any function we create will be able to read and write to these global variables, whereas variables that reside only inside a function can only be accessed by that function. A variable is a placeholder for information. These placeholders are written to and read from constantly throughout a program. In this case, we need four (4) global variables. To define them you type the word 'var' (short for variable) then type the name you wish to give to each variable. You can name them whatever you like. Later in your functions, you will refer to these variables by their name. Go ahead and copy/paste the code below into your file and save it.

One must separate each variable with a commer (,). And when you have finished, the line must end with a semi-colon (;) which tells the browser that the instructional line it has just read is finished and is waiting for the next set of instructions.

The 'First' variable will hold the first set of numbers that is entered using our keypad. The 'Second' holds the set of numbers entered "AFTER" the 'Opp' key is pressed. The 'Opp' variable holds the 'operator' key which is the factor or plus/minus/multiplied/divided the four basic math functions for our calculator and the 'Overall' holds the answer to calculations. It is been set them to 'blank' or 'nill' or 'nothing' by putting '=""' after each one. This is because when the page is loaded and the variables are created we want them to hold no values (be empty). Variables in javascript as with many other languages reside in the computer’s memory (ram).

One can arrange these functions in whatever order you like as long as they go somewhere in between the <head> and </head> sections of your file. The first one is our "clear" function that is meant to work the same as the 'C' button on any calculator. It resets all the variables. Copy and paste each of the functions into your page.

This function simply calls the previous "clear()" function and we will load it when the page loads.

Listing 4: Illustrates the Functioning of the Numbered Keys

This function will be activated when the user clicks any of the numbered keys on the calculator.

Listing 5: Code adds the Operator sign to the ‘Opp’ variable

This function adds the operator sign to the 'Opp' variable. The value given to the $sign variable inside this function is the value of the key pressed by the user. for eg: the plus ( + ) key. There is another 'IF' statement inside this function which checks to see if the 'First' and 'Second' variables have values already. If they do, then it calls another function 'DoSum()' which does the calculation. That function is next (below). If not, it just adds the operator to the 'Opp' variable only.

This final function completes the code. It checks to see if there are 3 values inside the variables. If so, it calculates the answer. It takes the new variable 'string' and adds to that string all 3 values from the global variables (First,Opp and Second) so we end up with one string. 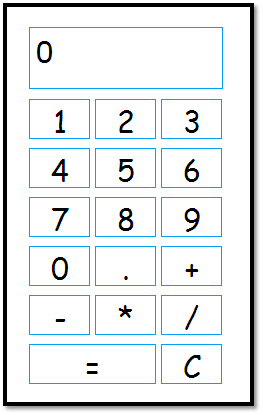 The article explained the step by step process to come up with a calculator developed in JavaScript. See you next time.


Software developer with more than 5 years of development on Java, HTML, CSS.

Joel Rodrigues
Hi, Hamzem. When you use the getElementsByClassName function, it returns a HTMLCollection, not a unique element. In this case, the most indicated is the getElementById funcion, because it works over just one element.
6/20/2014 8:50am   Answer it

William
Code, process, and explanations appreciated; but, is there a chance of making the style sheet code or link via internet available as well? Functionality has been tested successfully, but the CSS formatting would be icing on the cake! Thank-you for considering...
[+1 year ago]    Answer it

Mr.Bool Editor
Hi Willian, Have you taken a look at the downloadable source code available at the top of the page?
5/11/2015 4:32pm   Answer it

William
Hello, The source code provides the full HTML text needed, but only a link (reference) to a CSS file: <link type="text/css" rel="stylesheet" href="styles/calculator.css" />... The way it is written, my expectation is that the "calculator.css" file would be on the host computer of the web page in a folder called "styles". The zipped source code file did not provide this... If it is too difficult to obtain, I may be able to draft one suitable enough for my class purposes... Thank-you for your attention and consideration...
5/12/2015 4:23pm   Answer it

mahfi
Hi.i am new to programming language.i liked ur work here.would you explain "$key" for me?please.
[+1 year ago]    Answer it
Services
Add a comment
Add to favorites
Mark as viewed
Add a note
+Front End Web