How to customize different buttons in Android

Today we are going to learn “Customization of Button” in Android, in this article we will learn how to give different shape to button, also how to set background and image to button.

Button is a widget in android which is used to perform click event on the form i.e. for submitting the form data or to trigger/start some operation button is being used. There are different types of button widgets available in android they are Button, Image Button, Radio Button, Check Boxes and Toggle Button out of which radio button and checkboxes are used as selection widget i.e. they are used when we have to select from multiple options. Toggle button have two states that is on and off states, as the name indicates it toggles between two states i.e. if it is ON and we click it moves to off state and vice-a-versa. So we are left with Button and Image Button to submit the information. Almost all the property of Image Button and Button are same but the difference is that on image the click effect is visible on clicking the button, where as in normal button if we apply background to it click effect is not visible. So, in android we need to customize the button as per as the requirement of the application. In android default shape of button is rectangle, and default colour is grey which need to be changed while creating application like the shape of button need be changed to circle or oval, background colour applying images to the button and applying text with images over the button. There are different ways to customize this button. So we will see the different ways to customize the button in android.

So, let’s start the customization of button in android using images

Customizing button using image is the most common and general practise of customizing the button. Firstly, create a new android application in eclipse Eclipse file->New->Android Application Project. So for customising the button using image you require the image of button which you need to apply as its background. So place the images of button in res->drawable. Like in my case i have place the image name as one.png in drawable folder.

Now in your main.xml create a button and give the background property to it giving the name of image you want in its background. Like in my case it is android:background=”@drawable/one”. Below is the code snippet of main.xml with two buttons one with image and another without image.

Listing 1: xml to create a button in Android

When you run your application on the emulator it following output will be generated. 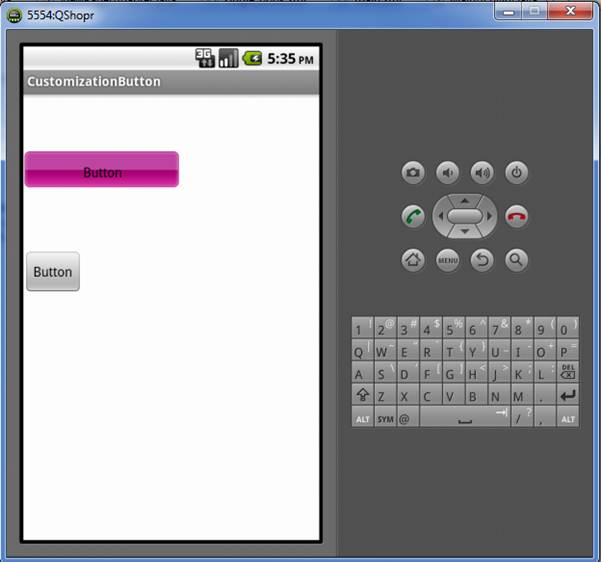 But when you click on the button it will not display the click effect like a normal button do. So, for the user it is very difficult to find out whether the button is pressed or not and they keep on pressing the button which may crashes the application. So for creating a click effect you have to make another xml file in drawable folder. res -> drawable -> button_menu.xml.

Below is the code of button_menu.xml

And also change the background property of button i.e. android:background=”@drawable/button_menu”

Applying the button_menu xml to the background of button. 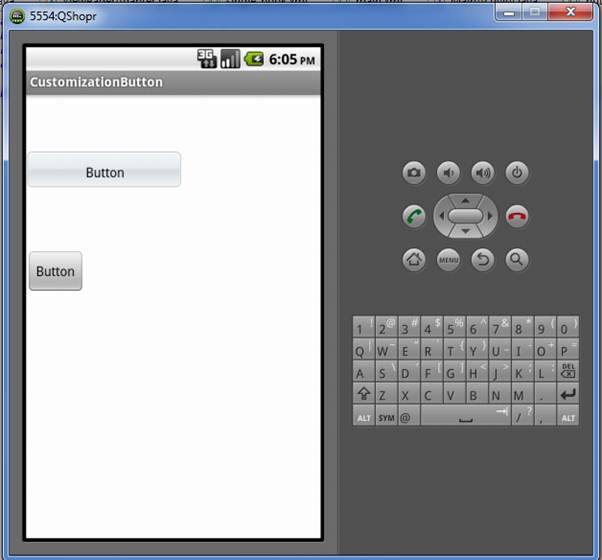 Figure 2: Output when button is clicked

2. Changing the shape of button

As already told default shape of button is rectangle so now I will tell you how to create OVAL button in android.

For that you again need to create an xml file in your drawable folder, and name it as button_shape.xml

The codes for button_shape.xml are as follows:

And now give the background to button 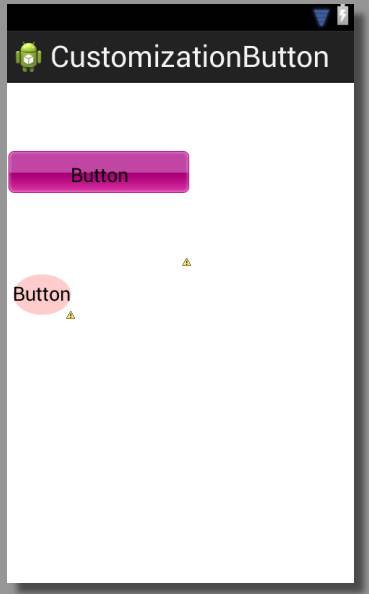 Figure 3: output how your button will now look

3. Now we will see how make Corners of button Round.

Below is the code of round_corner.xml

And give background property to button i.e. android:background=”@drawable/round_corner”.

Here round corner is the name of xml file. 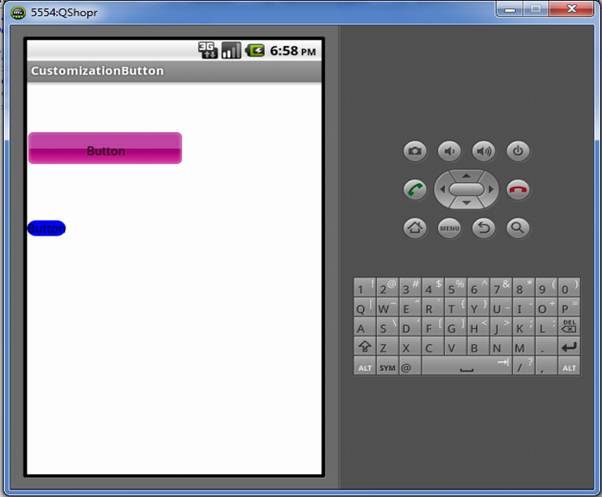 Many of times in your application you require a button containing both text and image. Like Text describing the action and a image corresponding to that action. Image helps user to find more easily and faster the button for performing a particular task. Like search/find, delete, edit etc. one way to archive this is by using a image having both icon and text. And the second approach is placing text and image on button.

So now we will see how to achieve this thing in android. So firstly create a button in your xml file. And places an icon image in your drawable folder say icon.png. Below is the code of main.xml in which button is used along with image.

For achieving this I have use the property android:drawableLeft there are other more properties like drawableRight, drawableTop, drawableBottom can be used to place image along with text in on button in android.

The output for the above layout is shown below: 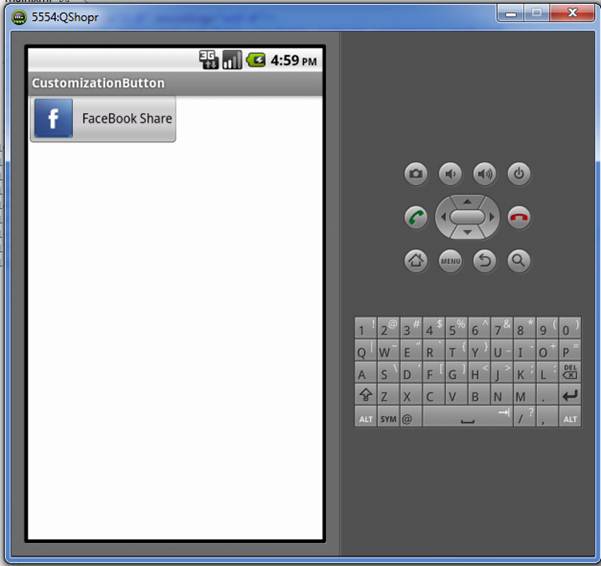 And the folder hierarchy for the application is shown below.

The customization of widgets is done in order to make UI feel richer in terms of appearance and making it more users friendly. Like we can also place images of icons on button .In these tutorial we have seen customization of button using images, Changing the shape of buttons, making corners round of a button, and using text along with image on button.