How to Create Websites in Smarty PHP Template

In this article, we will see an introduction to Smarty Template and the different features related to it, and also its use when creating websites.

Following are few of the important features of Smarty PHP Template that makes Smarty unique in many ways:

The question that arises in every mind is that why use Smarty. The answer can be found easily by looking through the following aims and goals of Smarty:

Before getting started with development using Smarty, first of all, I will present the procedure of installing Smarty PHP Template. Download the latest version of Smarty (.zip) by clicking here. Extract it and you will see the following files as shown in the figure: 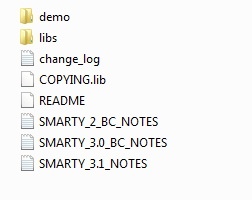 Rename the folder "demo" with the name of your choice or leave it as default. It is up to you and not mandatory to change. Web server running PHP 5.2 or greater is required for Smarty. Place the Smarty folder in "www" folder of Wampp if you are using Wampp Apache server or in "htdocs" folder of "Xampp" if you are having Xampp Apache server. As I am working with "Wampp" Apache Server, so we will use it in in this article.

Nothing to do with the 'libs' folder, just leave it as is. The 'libs' folder basically contains the files which are shared among all applications. Therefore, these files should not be edited. To use the services of lib files, just include them in your file via "require_once()" function, and inside the function, provide the "Smarty.class.php" file as require_once('Smarty.class.php'). Including "Smarty.class.php" file will allow access to all the functionalities contained inside this file. Initialize an Object of Smarty to display the template file or obtain some other functionality through Smarty variable. I will illustrate it later when an application program is presented which will be done in the next section. In the "demo" folder, you will find the sub-folders as shown in the following image:

Among these folders, we only have to deal only with the "templates" folder which contains the HTML (front-end) files. The files inside the "templates" folder should be saved with the extension as ".tpl" rather than ".html" or ".htm" as it does not render the components of Smarty when the template file is not saved with ".tpl". The PHP files should be saved in the "demo" folder without creating another sub folder.

The tags of the Smarty Template are enclosed within '{' and '}' delimiters. If you are using content outside of the delimiters, then it will be displayed as unchanged or static content. Whenever any template tag is found by Smarty, it tries to compile them and display the suitable output in its place.

The method "assign()" in PHP file is used to assign variables to the template. Here is the output of the example:

Similar to PHP syntax, the arrays in Smarty can be referenced by array indexing. The following example shows how to do it:

Here is the output to the above example: 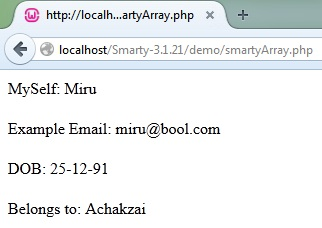 The variables of associative array can also be referenced by providing a particular key after a dot (.) symbol. The following example shows how to do it: 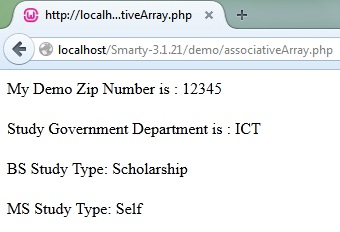 The following figure shows the output of the comments example:

In Smarty, the Syntax of functions consists of function name followed by a single or multiple attributes. The function and its attributes are surrounded by delimiters. Let's look at an example for clear understanding of the concept of functions in Smarty:

The Output of the above example is presented below: 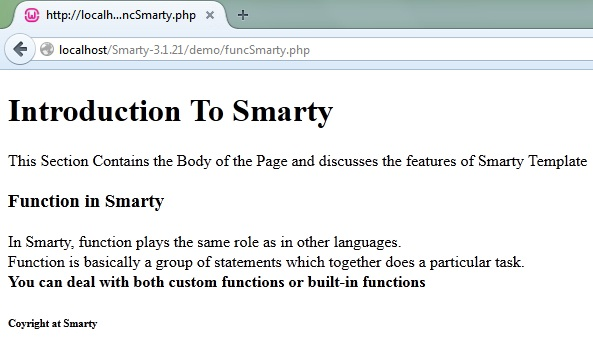 In the above 'funcSmarty.tpl' file, I have used an 'include' function, which is a type of built-in function having an attribute 'file'. This function is used to include any other template within the same file and post all the activities that are present in that template. The attribute 'file' is used to define the required file that has to be included in the present file.

In Smarty Template, the variable modifiers is applicable to variables, strings and custom functions. The syntax for applying a modifier to a variable is to specify the particular value and then followed by a pipe sign (|) and then the type of modifier you wish to apply. If you wish to apply additional parameters for changing the behavior of a modifier, then place a colon (:) after the name of the modifier and then place the additional behavior parameter. Let's discuss the different variable modifiers one by one:

The cat modifier is used to add or concatenate a value to the variable. The following example illustrates it clearly:

The output for the above example is given below:

The lower modifier is used to change the variable value to a lower-case. The example below makes it clear to understand.

Here is the output for the above example:

The lower modifier is used to change the variable value to a lower-case. It is explained in the example below.

Below is the output for the above stated example:

The capitalize modifier is used to capitalize the first letter of each word[%1] present in a variable. See the below example for illustration.

Here is the ouput for clear understanding:

Below is the pictorial output for the above stated example: 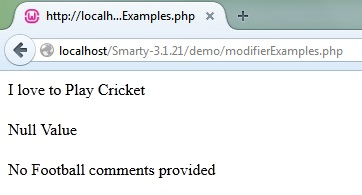 The nl2br modifier is used to convert the (line breaks) '\n' to in HTML to make the possibility of having a new line in the variable.

The count_words modifier counts the total number of words present in a variable. See the following example for clear understanding.

The output for the above program example is stated below:

The count_sentences modifier counts the total number of sentences present in a variable. The modifier identifies sentence being terminated with dot (.), Exclamation mark (!) or Question mark (?).

The count_sentences[%2] modifier counts the total number of paragraphs present in a variable. 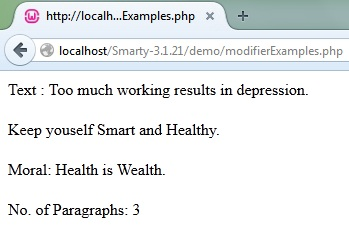 The indent modifier is used to place spaces in the beginning of every line. By default, four spaces are placed, but if you want to place additional or more spaces, then provide additional parameter value after indent modifier. The following example will make it easy to understand.

Here is the output for the above example:

The replace modifier is used to replace the match value present in a variable.

The output for the above program is illustrated below: 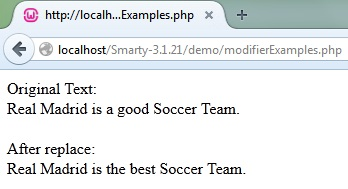 Let's conclude the truncate discussion with the following example to make the concept clearer.

Below is the ouput for the tuncate modifier example: 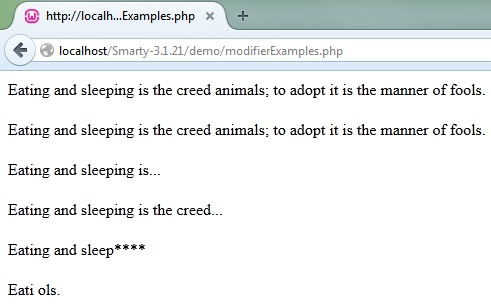