How Garbage Collection works in Java

In this article we will describe how garbage collection works in java and its advantages/disadvantages.

As the name suggests, Garbage Collection refers to removing of objects which are no longer in use. It is a well known fact that irrespective of their scope objects, Java stores objects in heap. Thus, if we keep on creating objects without clearing the heap, our computers might run out of heap space and we get ‘Out of Memory’ error. Garbage Collection in Java is a mechanism which is controlled and executed by the Java Virtual Machine (JVM) to release the heap space occupied by the objects which are no more in use. In contrast to C++, garbage collection in java relives the developer from the Memory Management related activities. The JVM executes this process with the help of a demon thread called the ‘Garbage Collector’. The garbage collector thread first invokes the finalize method of the object. This performs the cleanup activity on the said object. As a developer we cannot force the JVM to run the garbage collector thread. Though there are methods e.g Runtime.gc () or System.gc(), but none of these assures the execution of garbage collector thread. These methods are used to send garbage collection requests to the JVM. It is up to the Java Virtual machine when it will initiate the garbage collection process.

For the sake of Garbage Collection in Java, Heap memory is divided into three parts :

Young Generation is further divided into three parts known namely Eden space, Survivor 1 and Survivor 2 space. A live object resides in Eden space and after a Minor Garbage collection if the object is still live it is moved into survivor 1 and subsequently to survivor 2. Finally after the Major Garbage collection the object is moved to Old or tenured generation.

Detection of the eligible object is done by defining a set of roots and tracing the reachability from the roots. An object is said to be reachable if there exists a path of reference from the roots using which the executing program can access the object. These roots once defined are accessible to the executing program. An object which is reachable from any of these roots is considered to be "live." Objects that are not reachable by the defined roots are considered to be garbage, as they cannot put any impact on the execution of the program further. In addition to this, an object which is referred by a live object is also considered as reachable. These reachable objects are accessible by the executing program; hence, these objects should remain on the heap as long as they are required. An object which is not reachable can be garbage collected since there is no way a program can access it.

So the available System.gc() method can be used to request garbage collection. And the System.runFinalization() method is used to run finalizers for all the eligible objects for GC.

Listing 1: The sample describes the syntax for calling garbage collection and finalizer

The following diagram describes the garbage collection model in java. 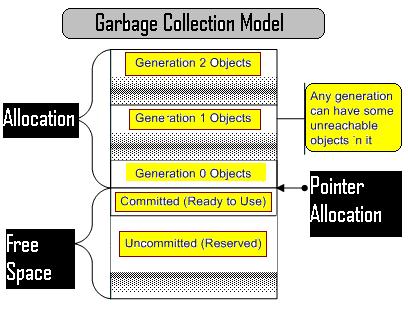 Since J2SE 5.0, we have following types of Garbage collectors. Programmers can normally choose any of these to reclaim the unused memory using the JVM Parameters. These are mentioned as under:

The table below describes different types of garbage collectors

Garbage collection mechanism takes off the burden of a developer to manually release the memory. Allocating the task of memory management to JVM has lots of advantages:

Garbage Collection is the mechanism of reclaiming the heap memory by flushing out the objects which are not referenced by any threads.

For the sake of garbage collection, java heap is divided into three generations :

Newly created and live objects reside within young generation and subsequently moved to the old generation as their references are weakened.

Garbage Collection has an impact on the performance of the program.

There are following types of Garbage Collector :

There is no manual way of doing garbage collection in Java.