Discover in this article how simple it is to make use of geolocation on your mobile applications using the Google Directions API in Android development.

This article aims to present the integration of the Google API on devices running the Android operating system. The execution of such integration will be demonstrated through a simple example where a navigation route will be implemented through a point of origin and destination entered by the user using the Google API for geolocation, Google Directions API.

The term refers geolocation to identify the geographic location in the real world of an object, like a radar, mobile phone or computer terminal connected to the Internet.

In computing, a geolocation software is used to infer the geographic location of Internet connected device, using as one of the possible approaches identifying IP number of the device, to finally get to its location.

Services based on geolocation (SLBL'S) are generally divided into two main categories: 'push' services and 'pull' services. Push services imply that a user receives information (depending on your location) without having to request it actively. A practical example would be sending a notification of offers from a shop from which the user is approaching.

In the case of pull services, information is only sent to the user if it requests explicitly. An example would be in case the user wants to know where the nearest restaurant.

The geolocation opens a wide niche of applications to be explored, such as:

Getting the location of an object

There are basically two ways to obtain the geographic location of an object: GPS and the triangulation of antennas.

In tracking using GPS, the embedded device determines its own position after connecting to at least four satellites in a constellation of US satellites. With the data received, the equipment crawler can calculate its position, and thus the position of the vehicle in which it is embedded.

It is also possible to reverse communication, both the tracker via GPRS Mobile as the X in the satellite. In the case of satellite tracking, for example, sending commands is possible like: a lock, where the command starts in a computer to follow the satellite earth station then would pass through the orbiting satellite to the vehicle, reaching it.

In the tracking system of triangulating of antennas, a radio network is built exclusively for this purpose. The antennas receive the radio signal from a device installed in the vehicle and, based on this signal and the known position of the antennas, we calculate the vehicle position. There is no need in this case of a second means for sending the position information as in the case of GPS. Everything is done via the own radio network set up for the service.

Several companies working with vehicle fleets have also joined the tracker device that besides used to ensure greater security, can be used as a source of more specific information. As with the tracking of vehicles, it is possible to calculate the time of a given delivery.

Developed by AT&T and commercially available in some cities in the US, the Find Friend, as the name suggests, is an application to approach people. It allows a user to locate people (previously registered) and arrange to meet with them. The application can also suggest places of meetings as restaurants, and directions - with the help of maps - to reach the agreed place.

Waze is a GPS geographic based in navigation application programmed for smartphones that provides real-time information and user information and route details, downloading information depending on the portable device location on the network. It was developed by Israeli startup Waze Mobile, which was acquired by Google in 2013. People can report accidents, congestion, speed, 'blitzes' police, and can upgrade roads, landmarks, house numbers, etc. The Waze also identifies the cheapest gas stations near the user through your route. In January 2012, the application had been downloaded 12 million times worldwide. In July 2012 the Waze announced that it had reached the 20 million users, half of them recruited in the last 6 months. According to Yahoo!, there were about 50 million Waze users in June 2013.

Google Directions API offered by Google is a platform that allows the route calculation from a point of origin and destination through an HTTP request and the map display using Google Maps.

The use of Google Directions API is subject to a limit of 2,500 requests consultations routes per day. Each route search counts as a single request in his daily quota when the mode of transport is driving, walking or cycling. Search routes with public transport is counted as four requests.

To create an application using the Google Directions API you need first to obtain a passkey to be incorporated into the application you want to make use of the API. Obtaining the key is made totally free of charge.

To create a new Android project, click the right button in the Package Explorer and go to the New > Other> Android Application Project, as shown in Figure 1. 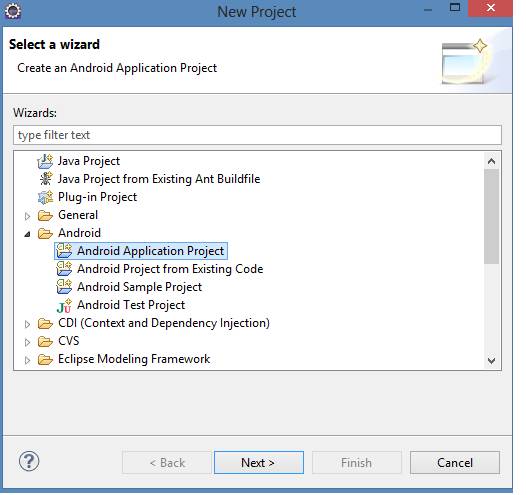 On Android, the term activity serves to designate a screen that is shown to the end user, and this consists of two artifacts screen:

The code of the XML file layout is shown in Listing 1 and consists of two text boxes for entering the data source and destination, respectively, and a button to trigger the execution of the design of the route. The initial application screen is shown in Figure 2.

The root component file is a component of LinearLayout type with the property android:orientation defined as "vertical". This setting tells Android that the components are positioned one below the other.

The code of the manager class of the Activity is shown in Listing 2. This class is responsible for retrieving the values of the components defined in the layout file. The validation of the source and destination fields is performed, and if these are correctly filled, navigation will be delegated to the MapActivity class, responsible for the map displaying.

The screen change on an Android application is performed using a component of Intent type. An Intent is a class in this standard Android API that allows navigation between Activities and passing parameters between Activities using putExtra() method.

Retrieving and displaying the map parameters

The map with the planned route is shown in Figure 3.

Since its version 3.0, Android included in its API fragments feature, which enables drawing the user interface in a more dynamic and reusable way, in order to support different screen sizes.

A fragments example would be a news application. In a tablet, we would have a screen on the left fragment containing a news listing. By clicking on a list item, would be made available another fragment of the first side containing the details of the chosen news. In a smaller screen size device such as a cell, the detail of the selected fragment news occupy the entire space of the screen, as outlined in Figure 5. 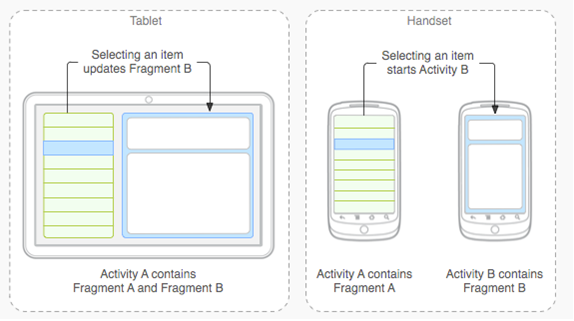 The simplest way to embed a map in an Android application is creating a fragment of type MapFragment. The MapFragment class is a special kind of view in the Google Maps API which acts as a template for rendering the map in the application.

On Android, if not specified any competition, all the code is run on the main thread. This thread is known as UI Thread, also called main() thread.

This becomes a problem in the case of the existence of processes that take a long time to run, because if any processing that takes longer than five seconds the UI thread will stop responding and the application will present an ANR (Application Not Responding) to the user.

One way to work around this problem is through the use of AsyncTasks, which are nothing more than objects that encapsulate and make it transparent to the developer to use threads, allowing the developer to perform operations in the background without Threads API knowledge from the Java platform.

In our example, the code responsible for sending the HTTP request to the Google Directions API is encapsulated in a AsyncTask because given that this is a potentially costly process for the application, do not run the risk of "lock" the main application thread waiting by an API response. The code of AsyncTask class is shown in Listing 5.

Now, just run the application and everything will be working fine.

This article aims to introduce the reader into the world of geo-referenced applications, using the famous Google Maps API to show a simple example of calculation and display of routes. We hope with this article have aroused in the reader's curiosity and interest in deepening knowledge in this fantastic area of mobile computing.