This article will present some important concepts regarding Java ClassLoader process, and they way the language deals with class loading.

Until recently, I did not give much importance in the functioning of the internal structure of the Java platform even when we have problems that Google does not know. To solve my problems I had to dig deep inside the JVM. Moreover, despite various materials on the network, it is difficult to understand the language and the inner workings of it. To begin to understand the operation of your program within the Java Virtual Machine (JVM) is necessary to understand the heart of the JVM ClassLoader (CL).

In an easy way, a CL is a structure that is responsible for the loading of the bytecode (.class). Each ClassLoader contains what it can carry in your specific classpath, that is, the address (directories) of our classes. A classpath can contain multiple directories, thus the CL will search for the class in the first directory specified, if it does not find the class it goes to the second, and then successively until finish the list of classpath directories. However, the most important is to understand how the CL load your classes and how it is organized internally.

First of all, it is necessary to explain that a type (class) in Java is identified by its name and its CL. For example, one object of Sheet class from CL 0x2bbd86 is different from an object of Sheet class from CL 0x813b2 because despite being the same class, they have different CLs. Java does this to ensure consistency of objects inside the JVM. Because, otherwise, it could cause a conflict between a Leaf object that represents a tree and its assignment to a leaf object that represents a payroll. I.e., objects originated from a class of the same name cannot have identical structures.

It is also important to understand the class loading key process, the delegation. One single ClassLoader has always a ClassLoader parent and will always do the following:

Now, we will explain the hierarchy of ClassLoaders. When the JVM starts it has no loaded class. The JVM uses the class loading mechanism known as lazyness, and the JVM will be loading the classes as needed. But there is a problem, the code that loads a class is the ClassLoader that itself is a Java class, then if the JVM has no loaded class how it will load the other classes because according to the Java specification a class is loaded only when all its dependencies are loaded. As per the Java specification, ClassLoader inherits from Object which itself must be loaded by a ClassLoader which leads to a dead-lock. The solution to this is having a ClassLoader that, in fact, is not written in Java but in native code. This native CL will load the ClassLoader, AppClassLoader and ExtClassLoader classes. The hierarchy tree of a CL is formed by grouping some CLs. By default, we have the hierarchy defined in Figure 1.

Bootstrap is the native CL run by the JVM and its classpath finds the system classes, mainly the runtime of Java. The ExtCL (Extension ClassLoader) has as its classpath user-specific frameworks or applications, if you want these to be visible across the VM. The father of ExtCL is Bootstrap. Finally, the AppClassLoader, which is the CL that will load your application and your classpath is specified in the manifest of the jar or passed on the command line, and the father of this is the ExtCL.

We will make an application to demonstrate these concepts. Let’s start by Listing 1.

Listing 2. Result of the execution.

From this result we can clearly see what has been explained, the classpath of BootStrap is the "SDK" of Java, the ExtClassLoader is the directory of extensions and the AppClassLoader is the last in the argument in cli, if case it has not been passed, it assumes that it is the local directory:., or the one read from the jar's manifest. We can also see that who loaded our main class was AppClassLoader.

Well, you may have guessed by now that only these three CL are pre-defined and so we can add and change classloaders in that tree. This ensures flexibility and isolation of code, something widely used in application servers such as JBoss and Glassfish. The server will isolate each request creating classloaders so that a request is not visible in the "tree" of another; this ensures a great robustness and security platform.

Another great example of classloaders handling is the static scope of a variable. A variable has its static scope, that is, visibility, of the CL that was loaded down. Here's an example in Listing 3.

What you did can be seen in the image shown in Figure 2. 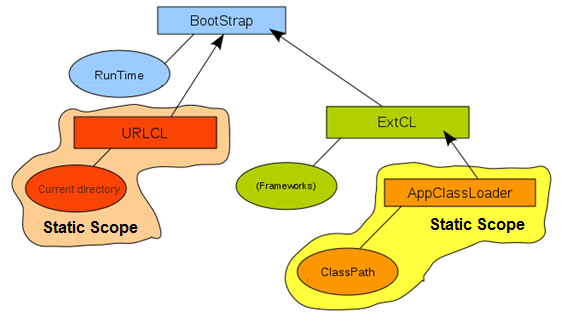 The problem is that the static variable is not defined in the path defined by the other CL, then it is considered a new "scope".

So one of the problems that may arise is, as I carry a request in different classloaders and so that they have no CL in common, all are children of null, how to ensure the code visibility along the JVM? We know that all, directly or indirectly, have a CL in common, the bootstrap CL (null). However, that CL only carries the runtimes of the Java platform by default. Few know that we can edit, add, and overwrite the classpath of BootStrap. You can even override the implementation of a class that does not like the JDK, as the implementation of the stack, etc. In conclusion, the idea is to extend the visible jars to this adding the files you want to be visible in the entire JVM. This is done using the X options (extended) of the JVM (Listing 4).

As said earlier, you can override (-Xbootclasspath) or add at the beginning (/p to prefix) or at the end (/p to append) jars to the Bootstrap classpath. You can even override the JDK classes. Here's an example:

Copy the file Integer.java of jdk source (java/lang) and modify its constructor, just like in Listing 5.

Compile and place this file in the directory ~/temp. Now run the following command line in Listing 7.

The JVM itself when starts, also performs some calls creating new Integers, as we can see. But the major result is that the current directory, represented by ., was pre-set in the classpath BootStrap and the normal JDK Integer was not called. This ensures great flexibility because we can easily change any implementation unwanted in JDK. Some hackers modify versions of the System class once the getEnv method to get the user PATH was downgraded once and could not call it until recently. But the main idea is that we can easily secure a global scope class in the JVM putting your jar or .class in the classpath list of BootStrap.