Defining Factory Patterns and its usage in Java

In this article we will have a clear understanding of factory patterns and its usage in Java.

Before starting describing factory pattern, we should have a clear understanding of design patterns and its usage. Design pattern can be described as a tested design mechanism which can be used to solve common day to day programming issues. These patterns are widely tested in different applications and proved to be efficient enough to use. The advantages of using design patterns can be as follows

There are many design patterns in core java and j2ee world. Creational pattern is one of the most important and widely used design patterns in application programming. The name itself describes the purpose of this particular pattern. The name ‘Creational’ suggests that it is used to create objects in java applications. So most of the time this pattern is used when we need to create objects that will be used in application.

Factory pattern is one of the most important design patterns in core java. It is a part of creational design pattern. The name ‘factory’ also suggested that it is a factory of objects. So the factory pattern is used to create objects for application requirement. The creational patterns abstract the object instantiation and creation process by hiding how the objects are created when a requirement arises. It also makes the system independent of the object creation process. So the developer only needs to send request to the factory for new objects and the factory will take care of it. After creating the required object, factory sends it back to the requesting application. Now the application will get the ready made object to use. So the flexibility of the application increase many fold and development time reduces significantly.

The following diagram shows the simple hierarchy of factory pattern 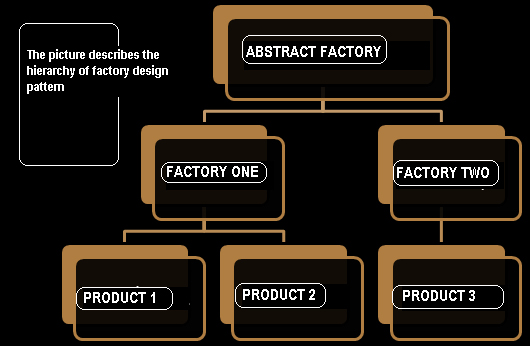 The above diagram describes a simple hierarchy of factory pattern .Factory pattern returns one of the several product subclasses based on some input passed to the parent class. You should use a factory pattern if you have a super class and a number of subclasses, and you have a requirement to get any sub class at any point of time. The advantage is, you as a developer only needs to send some requirement (here input parameter values) to the factory (here the parent class) and the factory will return the required object to the calling class.

Let’s look at a sample code:

Now let’s look at the calling code, which uses the factory:

The important point to note is, factory pattern returns an instance of several object instances, but the calling method is unaware of the actual implementation class. The calling method invokes the method on the parent interface and the internal structure of the factory framework returns the correct object. The factory design pattern reduces the coupling or the bonding between the calling method and called objects. This decoupling is a very powerful and common feature in many frameworks as it introduces flexibility in the application architecture. In future, to conserve memory and increase performance you can cache the objects or reuse objects in your factory with no changes to the calling methods. You can also load objects in your factory based on parameter values read from an external properties file or xml file. Another benefit of factory pattern is that the developer does not need to call constructors directly; instead they can use more meaningful method.

So the advantages of factory pattern are as follows:

So that is all about factory design pattern in java. It is one of the most widely used design patterns in various Java libraries and frameworks. So it is always recommended to used factory pattern whenever you have a requirement of many sub classes and there is a parent class. But remember, if there is no requirement of factory pattern then please do not use it. Otherwise it will unnecessary create complexity in your application code. The success of design pattern implementation only depends upon its appropriate use in correct situations.