This article briefs you about Database Management System often called as DBMS and give you an overview about it.

Following section shall be covered in this article:

Database is collection of interrelated data where data can be easily accesses, managed and updated. For example, consider office department in school maintains details of the student such as name of the student, age, address, class etc. These all records are related with student stored in a database.

Database management System is collection of data and set of programs to access the data. It allows creation, definition and manipulation of database. DBMS provides protection and security to database. Some examples for popular dbms are MySQL, Oracle, Sybase, Microsoft Access and IBM DB2.

DBMS is used by many users for various purposes. In large organizations, many people are involved in design, use and maintenance of database with hundreds of users. The people whose job is to maintain day-to-day use of large database, we call them as actors on the scene. Some of them are described as follows :

The basic client/server architecture was developed to deal with large number of PCs, work stations, database servers, web servers and other components are connected with network. The client/server architecture consists of many PCs and work stations which are connected via network .A client in this framework is a user machine which provides user interface and local processing.

The second approach i.e. two-tier architecture was taken by some object oriented DBMSs, where DBMS were divided between client and server in more integrated way. The server level may include data storage on disk pages, recovery and buffering of disk pages and other functions. The client level may include user interface, interaction with programming language compiler, recovery across multiple servers and other functions. It is simplicity and compatibility with existing system.

Three tier architecture adds intermediate layer between the client and server as shown below. 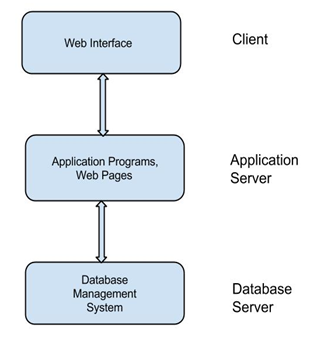 An end user sits on client tier i.e. web interface which is used by client to communicate with server through intermediate layer. All views are generated by applications which reside in the application tier.

The middle layer sometimes called application server or sometimes web server depending on the application. This tier is uses business roles that are used to access data from the server. For user application tier works as view of the database. The intermediate tier accepts requests from the client, processes the request and sends the commands to database server.

is also known as high level data model that provide relationship between different entities. Conceptual data model is created by combining requirements from various sources like business analysts, business documents and end users. It is first step in constructing data model and which provides representation of business of the organization. It describes structure of the database and gives information of about main subject area of the organization. It comprises relationship between subject area and entities in the subject area.

Physical data model is also known as low level data model that describe how data is stored in the computer by representing information such as record formats, record orderings and access paths. It is used to create relationship between tables. It includes tables, columns, primary key, foreign key and relationship between tables. Database performance, physical storage etc are the important parameters of the physical model. An access path is structure that makes search for particular database records. It includes storage allocation of database system. An index is example of access path that allows direct access to data using index keyword.

The properties of a entity is called as attributes, consider above example, STUDENT is an entity with properties name, student_number, class and student_address.

Relationship exists between two database tables when one table has foreign key that references to primary key of the other table and it is also associates between entities.

Following are types of relationships between tables.

The relational model represents the database as collection of relations. It is most popular data model in DBMS. In the relational model, all data must be stored in the form of tables and each relation consists of rows and columns. When a relation is thought of set of table values, each row in the table represents collection of related data values.

In the relational model, each row in the table represents real world entity or relationship. In this model, a row is called a tuple, a column header is called attribute and table is called a relation. Each row contains unique value and each column contains values from a same domain.

The description of database is called the database schema which is specified during database design and is not expected to change frequently. A displayed schema is called schema diagram. In relational database, the schema defines the tables, fields and relationships between fields and tables.

The schemas are generally stored in the data dictionary. The term often used to refer graphical representation of the database structure.

An entity set is collection of all entities of a particular entity type in the database. For example, all persons having an account at a bank.


Keys are important part of relational database. They are used to identify relation between tables.

Recursive Relationship: Each entity type that participates in a relationship type plays particular role in the relationship. A same entity participates more than once in different roles. E.g. Department plays role of department or employer.

This article covered some of the basic concepts of DBMS. Hope you enjoyed the article.

arun kumar singh
nice job mam it was awsome i like it the way you have presented it.
[+1 year ago]    Answer it

sanjeev kumar
please explain with example for begginers.
[+1 year ago]    Answer it

[author] Manisha Patil
Hi Sanjeev, As its pure theory I have tried to explain with simple examples. Let me know which section you are referring to..
6/25/2014 2:28am   Answer it