Those who practice TDD in their day to day know the benefits of cleaner, tested and easy to modify code. These benefits, however, do not come automatically, because it takes a lot of study and practice to fully understand the technique and how to apply them.

Consider the recommendation to take short steps, ie, test the code gradually. The big advantage is that when a problem occurs, we know immediately the exact spot of the event. However, very small steps may bother the programmer. You have to interrupt your thought flow at all times to change window, give the command to run the tests, see the result and only then resume the thread. Often what happens is that it fails to follow the recommendation, giving up the benefits.

Is the problem with the developer or with the development environment? In this article you will learn a way of practicing TDD in JavaScript that streamlines the results visualization and promotes continuity in the workflow. You only need to save the edited file to see test results immediately.

Practicing Continuous TDD means that you will see the result of your project tests running without leaving the development environment and executing a specific command. The command will run automatically as soon as you save the file you're editing. Set up your environment using the tools described in this article and notice the difference in your productivity.

Example 1: Creating a project from scratch

In this section we will be set up a JavaScript project from scratch that will demonstrate the configuration of the tools used to practice ContinuousTDD.

Let's start by opening a terminal window and running the commands described to install Node.js and NPM. In Ubuntu or derivatives, use the following code:

On other operating systems, visit the Node page (see Links section), download and install the appropriate version. NPM will be installed along with Node.

To verify that the installation was successful, run the following commands and make sure the numbers of the installed versions appear:

To install Gulp globally, use the following command:

If you are in Windows, omit the word sudo. This command lets you run gulp command from any directory.

Now we need to create a directory called example1 for the new project and access it. In any operating system, use the following commands for this:

Then, start a new project using NPM through the following command:

This command creates a package.json file, which is similar to Maven pom.xml (Java). It describes the basic data of your project and also the dependencies of external packages.

You will be asked to fill out various data, such as project name, version, description and license. For the purpose of this article it is not necessary to fill any of such data. You can simply press Enter on all the questions to use all default values.

This installs the gulp and gulp-jasmine tools locally, ie, only in the current project in a directory called node_modules. The --save-dev part instructs npm package.json to update the file, adding gulp and gulp-jasmine as project dependencies in development time. This lets you download and install the dependencies again at any time in the future just running npm install command. This is useful if you don't want to add dependencies to version control. If you use Git, for example, you can add node_modules to .gitignore file, avoiding versioning external dependencies.

It must create a Gulp configuration file in the project root. To do this, create the src folder with the following command sequence:

The file that sets up the execution of Gulp is called gulpfile. Therefore in the project root, create a gulpfile.js file with the content shown in Listing 1.

Source code of the project

After you create the project structure, the JavaScript files will be written. For this example, imagine a class representing a tree, which should offer five fruits. First, it is writing a specification for trees. Then the Tree class will be implemented. This will be done in very short steps, with continuous checking to see if the code is correct. In a dynamic language and interpreted as JavaScript, it makes a big difference: you do not have a compiler available to point out many programming errors, such as in Java or C#. Thus, automated testing becomes the detector of these errors.

The specification code (i.e., test) is placed in src/spec and production code (ie, one that implements functionality) in src/prod. Open a text editor and create the TreeSpec.js and Tree.js files, present in Listings 2 and 3, respectively.

Now, there is a specification for the Tree class and an outline of its implementation. In a terminal, in the root directory of the project, run this command:

The only existing test in the project will be executed and the result should be:

Gulp will keep running, waiting for changes in the file system to run the tests again.

Next step is to implement getFruits() method in Tree class. The ultimate goal is for the tree builder to create a fruit vector and store it as a property of the object.

Practicing Continuous TDDimplies in simultaneously view the code and the tests. For this, let's make visible our text editor and terminal windows, one beside the other. If you are on Windows or Linux Mint, you can do this as follows: click on the editor window and press Windows Key + Left Arrow; click on the terminal window and press Windows Key + Right Arrow. Windows are arranged side-by-side in a convenient way.

ModifyTree.js file to be like it's shown in the Listing 4.

When you save the file in a text editor, look at the terminal that the test is performed automatically, now with success. You should see the message "spec 1, 0 failures".

Thinking about TDD, just use fake implementation, because the method is not yet a full work: it just creates a new temporary array and returns it. The test passes, but there is still storing the vector in a property of the object. Let's turn this into a real fake implementation.

Complete the builder of the Tree class with this line of code and save the file:

The test should be run again and will continue being successful. Change the line return new Array (5);by this and save the file:

The test should now fail because it is missing the character '_' before the word fruits. Correct the error by switching tothis._fruits, save the file and see the test passes again.

Note the ease to realize the typo at the exact time and place in which it occurred. This allows us to work on the project continuously evaluating the result of each modification.

Example 2: adaptation of a web project

Now we will see how to adapt a web project using Jasmine to run on Node.

An important difference between Node and the browser is the module management mechanism. In Node a valueis assignedto module.exports to export the contents of a module and we callrequire('./ my-module') to import it. What is assigned to module.exports is the only thing that is visible from outside the module. In web projects, export is usually done in the global scope and the import is made with the <script> in HTML pages. This has several problems:

The solution to these problems is to adopt an efficient mechanism for module management. The newest version of JavaScript (ECMAScript 6) brings a native solution. While it is not feasible to adopt it for compatibility reasons, we can use one of many existing tools for that purpose. Among the best known are RequireJS, Almond and Browserify. The latter is what will be used in this article, mainly because of its simplicity of use.

When Jasmine tool is downloaded from the official site (see Links section), the zip package includes a small sample project. This project simulates a player application of music. There are tests for the Player class (in PlayerSpec.js file) and there are two production classes (Player and Song). The structure of files and directories is shown in Listing 5.

SpecRunner.html is the page that loads modules and complete these checks. When you open this file in the browser, the tests run normally, as shown in Figure 1. However, if you try to run PlayerSpec module in Node, you'll see that the Player module has not been loaded. The design of the modules needs to be modified to be compatible with Node. For browser compatibility, you should use the Browserify. 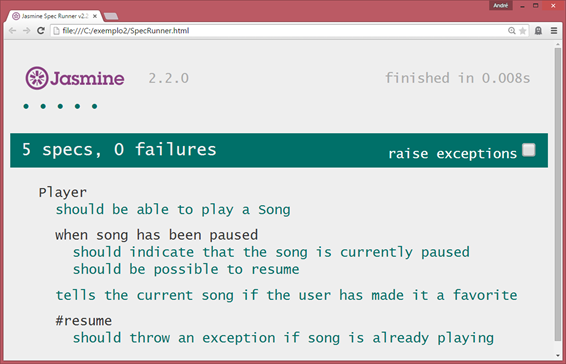 Figure 2. Performance of tests in browser

The following commands will configure the sample project to run both in the browser and in Node, allowing practicing ContinuousTDDas in Example 1.

To install Browserify use a terminal and run:

If you are in Windows, omit the word sudo.

Download the zip of Jasmine from the address https://github.com/jasmine/jasmine/blob/master/dist/jasmine-standalone-2.2.0.zip?raw=true and extract it in a example2 directory. If you are using Linux, run in the terminal:

Change the source code to use the Node style modules management. Open src/Player.js in a text editor and add this line to the end of the same file:

Do the same with src/Song.js. Add this line to the end of file

In spec/PlayerSpec.js module, add these lines at the beginning of the file:

Change SpecRunner.html to include the single script, so remove this excerpt:

and add this piece in place:

Test the project in the browser, opening the SpecRunner.html page and that tests should normally occur.

Setting up and running Gulp

Now, to practice ContinuousTDDjust do as in the previous example. In the project root directory run the following command:

Create a gulpfile.js with the content shown in Listing 6.

After creating Gulpfile in the terminal, run in the project root:

With this, you should see the same result as the previous example: the terminal must show the tests and wait for changes in the file system to re-run them.

This article showed how to configure a JavaScript development environment to facilitate the practice of TDD. In addition to what was shown, some improvements are possible. First is the use of the gulp-watch outer package to detect the creation of new files (not only the modification of existing ones). You can also use the watchify package to call the Browserify automatically to every change, simplifying the frequency execution of the tests in the browser.