Checked versus Unchecked Exceptions in Java

See in this article a complete overview around how to deal with checked and unchecked exceptions in Java.

It is remarkable the large number of programmers and developers who do not know how to handle exceptions that occur in the applications that they develop, whether the scope is desktop, web or mobile. In this scenario, many questions come up, such as: "Where should I implement the exception?" Or "What kind it should be?" Or "Should I handle it or throw it?" Questions like these that show us how developers from various programming languages need to better understand how these same languages deal with handling native exceptions, as well as understand the patterns and concepts that the community consider as "approved" and functional.

In the case of Java, specifically, the more we go down the detail level of technology, the more we encounter issues like hierarchy of exceptions, forms of treatment for the various versions of the language, as well as the old differences between the checked and unchecked exceptions, the subject of this article. Numerous articles and forums on the web deal with the subject in various contexts and business scenarios. In this article, we will try to represent some of the key questions about this difference through examples and explanations.

If you want to complement your knowledge regarding Exceptions in Java, please refer to some of our other articles in the portal:

Another way of looking at this difference is to think you use a checked exception every time you know that it will happen. What does that mean? It's simple; if in your Java method you feel that a particular error will occur and you need to point it to other layers or treat it in the same place, then you will have, without a doubt, a case of checked exception. See Listing 1, for an example. It is observed that the objective of the code is to launch an exception to be treated for other classes that call the method in question, since you know the cause of the error and know that it will happen.

Listing 1. Example of a checked exception

To understand this, you must first understand how the exceptions hierarchy works. See Figure 1. 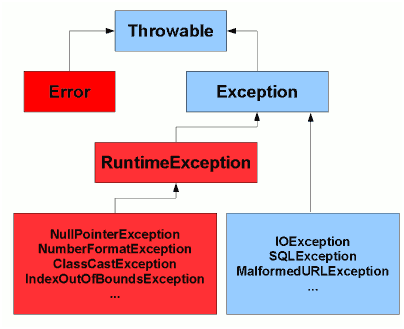 In blue we have cases of checked exceptions, where the use of any method anywhere in the Java API that has mapped these exceptions will be forced to treat/capture the same. Exceptions present in operations are the ones that pose a risk to the application, as exceptions to access files or IO devices (Input/Output) - IOException.java, database access -SQLException.java or classes not found exceptions - ClassNotFoundException.java. These exceptions inherit directly from java.lang.Exception, parent class of all exceptions in Java.

As for the exceptions of unchecked type have direct hierarchy with RuntimeException (which in turn inherits from Exception). This means that what qualifies an exception as unchecked is that it directly inherit from this class and not from Exception, as we have in checked ones.

Probably, you have already been asked to implement several times SQLException kind of exceptions when you were working with the database and not even noticed that you were in fact forced to. At the same time, it is more than certain that you have already seendozens of NullPointerException type exceptions in the console of your IDE while the application was being debugged or executed. In this case in particular, we cannot know when a NullPointerException will happen, since we only have this scenario when values are being manipulated at runtime.

To illustrate one unchecked exception there is no better class than a utilitarian. The utility classes are filled of unchecked exceptions within the Java API. See in Listing 2 some methods that exemplify that, based on the summing up we've done.

Where to use them?

This question disturbs the minds of many programmers, especially when they are new or have limited time experience in the language.

This same user started his speech with a quote from "Effective Java" book which is worth reading:

"Use checked exceptions to recover the conditions and runtime exceptions for programming errors (item 58 in 2nd edition)".

Below are the five issues raised and their answers:

1. The code below can be considered a checked exception?

2. RuntimeException is an unchecked exception?

4. The code below should be a checked exception? Can I recover the situation like this?