Architecture of a DBMS

See in this article some concepts related to data modeling, with emphasis on a DBMS architectures.

Following a series of 'Database Modeling "this is the article related to" Architecture of a DBMS, "which shows in a graphic way the levels of architecture and sample data communications with other databases.

Architecture of a DBMS

A data model is used to describe the structure "logic" and "physics" of a database. Relationships, data types and constraints are known as the structure or level, dividing into 2 types:

When using the term "description" of the database, as we understand the call of "schema of a database" that is specified for a project database.

Instances are formed when a data is saved in the database for a certain time they formed these database instances, being changed every time a change in the database is performed. DBMS ensures that all instances satisfying the schema of the database, respecting its structure and its constraints.

In a DBMS architecture has as main objective, separate user applications of physical data that are divided from the diagrams below: 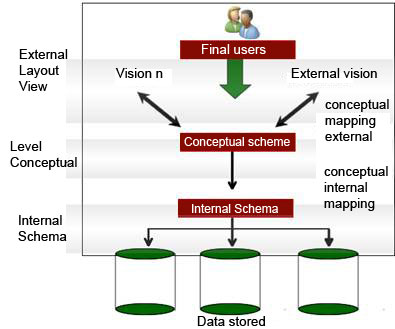 Figure 1: Architecture of a DBMS Layers

We can say that is allowed to perform schema changes or level of a database without changing a higher level. Recalling that only those levels or regimens are shown in Figure 1. Below is representing two types of data independence:

The use of language DDL (Data Definition Language - Data Definition Language) is defined by the conceptual and internal level. When there is a separation of internal and conceptual that is not absorbed a clear view of the user, the DBMS has to compile the DDL action, with the action, permission to execute the statements identified by their descriptions of schemes / levels where you will store them in the DBMS catalog.

By the end, when the DBMS uses the architecture with three levels, the language used is VDL (Vision Definition Language) that serves to deinição of views (views) of the database

When the developer has knowledge in language SQL (Strucuture Query Language) simply just use the basic commands that form the language DDL, DML and DCL, which are described below: 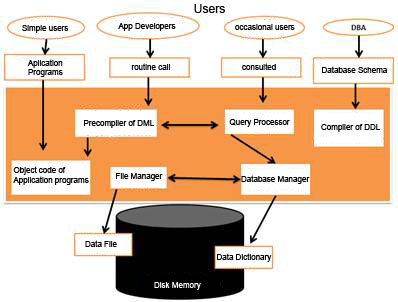 I hope you enjoyed and until the next opportunity.