See in this article how to use services and broadcast receivers in an Android app.

Mobile platforms support multitasking features, which enable simultaneous execution of multiple apps. Some of these apps require user intervention while others can run in the background without any user intervention. App components, which run in the background and perform specific tasks, are implemented in Android using services. Another useful app component is the broadcast receiver, which is used to inform all the concerned apps about the occurrence of an event, such as the arrival of an SMS. When an event occurs, the apps registered to receive the broadcasts are notified by the broadcast receivers.

They can be executed in a separate thread apart from the main thread and you can manage them from an app component, such as an activity. Therefore to interact with a service, you may need to create an activity. For example, you have a simple Rich Site Summary (RSS) reader with a list that includes all the new posts from a news website. A service will search for the updates by using the website, and then send those updates to a ViewNewsHeadlines activity. You can then create another activity, such as the ManageFeeds activity, to start or stop this service.

Services are generally used for updating data sources and providing updates to the visible activities. In addition, services are used for triggering notifications, such as SMS or e-mail received notifications. Services are started, stopped, and controlled from other app components including other services, activities, and broadcast receivers. A service can essentially take the following two forms:

Note: When a service is started, it runs within the main thread of the app that started it unless explicitly specified to run in a separate thread. Therefore, if a service is going to perform tasks which would block the CPU, such as playing music, you should run it in a separate thread to minimize the chances of errors, such as Application Not Responding (ANR) error. This would also make the main thread of the app to be available at all times for user interaction.

Lifecycle of a Service

Lifecycle of a Started Service

A service is started when a component, such as an activity calls the startService()method to invoke the service. Once the service is invoked, it runs indefinitely in the background until:

When a service is stopped, the system destroys that service. The following figure depicts the lifecycle of a started service. 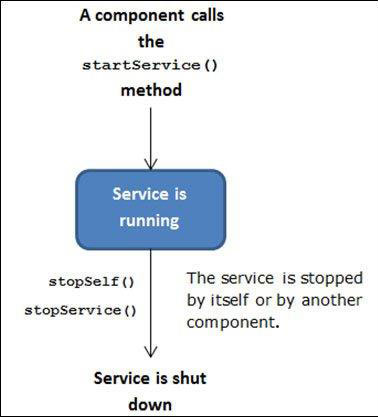 Figure 1: The Lifecycle of a Started Service

Lifecycle of a Bound Service

A bound service is created when another app component, such as an activity calls the bindService()method to bind with the service. Once the app component is bound with the service, it communicates with the service through the IBinder interface. The component can unbind from the service by calling the unbindService()method. A service can allow multiple components to bind with it, as evident from the preceding media player example. A service does not need to stop itself. It is automatically stopped and destroyed when all the components that are bound to it unbind themselves from it. The following figure depicts the lifecycle of a bound service. 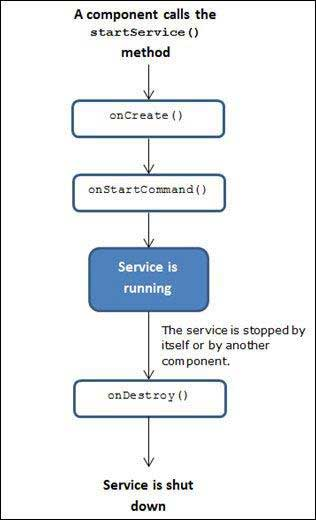 Figure 2: The Lifecycle of a Bound Service

A service can be started from an app component, such as an activity using the startService()method. This method takes an Intent object as a parameter, which contains the information about the service to be started, as shown in the following code snippet:

Since a service is an independent block of code, it needs to manage its own lifetime. This means that until the Android platform needs to recall the memory occupied by the service, the service will continue running in the background. A service needs to stop itself using the stopSelf()method, in case it is ideal for a long time. Alternatively, a service can be explicitly destroyed by another app component using the stopService(Intent iSrvce)method. iSrvce is the service's intent. Unlike the onStartCommand()method, only one call to the stopService()or stopSelf()method destroys the service.

To implement services in the Android apps, you need to:

Services are created either explicitly or through an app component that requests to connect to the service. Since services are independent blocks of code that handle some requests for performing tasks, such as getting the latest updates from the Web or playing music in the background, they need to be created as a separate class. To create a service, you need to create a class by extending the Service class. In addition, you need to override some callback methods defined in the Service class. These callback methods handle various aspects related to the lifecycle of a service. In addition, they provide a mechanism for other components to connect with the service, if required. Some of the important callback methods that you can override are:

Where, intent is the intent that has been supplied to the startService()method and flags provides data about this start request. startId is an integer that uniquely identifies each start request.

Where, intent is the intent that has been supplied to the bindService()method.

Where, intent is the intent that has been supplied to the bindService()method.

The following figure depicts the callback methods executed during the lifecycle of a started service. 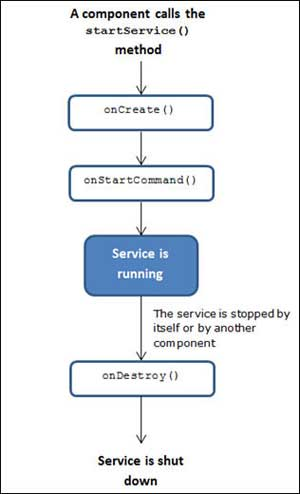 Figure 3: The Callback Methods Executed During the Lifecycle of a Started Service.

The following figure depicts the callback methods executed during the lifecycle of a bound service. 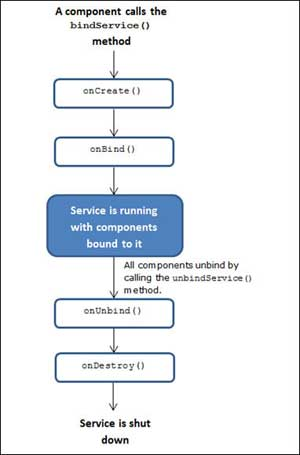 Figure 4: The Callback Methods Executed During the Lifecycle of a Bound Service

The following code snippet illustrates how to create a service and start/stop that service from another activity.

Listing 1: Creating a service and start/stop

Define a class for myService that will be started by an activity (myActivity). The following code provides the contents of the myService class: 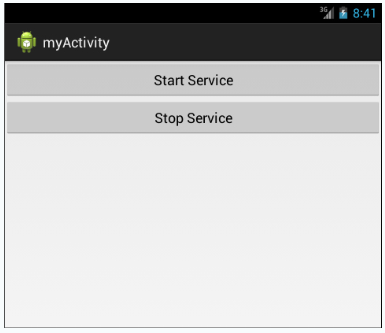 You must declare all the services that you create in an app's AndroidManifest.xml file. To declare a service in the manifest file, you need to add a <service>element as a child element of the <application>element, as shown by the highlighted portion in the following markup:

Listing 3: Code to declare all the services in config file.

Note: Similar to an activity, you can declare an intent filter for a service.

In an Android-enabled mobile device, messages called broadcasts are generated to inform any interested running apps about the occurrence of certain events. Broadcasts may be generated by:

Now this complete article shows how to manage the Services and Broadcast Receivers. I hope this article has clear all the conceptual complication in android service management. In Broadcast Receivers, there are two major types of broadcasts that can be received: (1) Normal Broadcasts, which are sent to all the interested receivers at the same time and the receivers run in an undefined order often at the same time. (2) Ordered Broadcasts, which are sent to all the interested receivers in a proper order, which means that a broadcast is delivered to one receiver at a time. When a receiver receives a broadcast, it can either propagate the broadcast to the next receiver or it can completely abort the broadcast so that it will not be passed to other receivers.

I am sure this article will help you a lot. Lots of new technologies are coming in my next articles. Watch this space for more.